The Way People Are Reacting To The Newest WhatsApp Update Is Beyond Hilarious!

If you are someone like me who does not use Snapchat, neither understands all the hype about it and simply despise people going crazy after it, it is time to kill ourselves (pun intended).

Well, gone are the days when you thought you could get rid of the whole Snapchat stories fever. After Instagram, the new update of WhatsApp incorporates the major feature of Snapchat. I am not having it at all. I already regret my decision of keeping my phone’s applications on auto-update.

Anyway, it is baffling what is happening to these social networking apps. Each and every one of them is losing their fundamental features and being integrated with this “live story recording” feature. Meanwhile, Snapchat fanatics are having the best time of their lives because these major apps having incorporated the very same that piques their interests.

Remember the time when WhatsApp was only a decent messenger app where you could send messages, call and record voice notes? Well, just yesterday, it was all together. 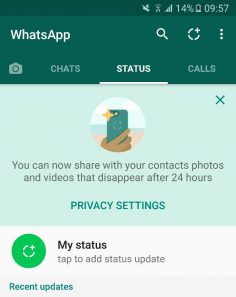 This morning has not been going too well. This WhatsApp update has been the highlight of the day. And tell you what, you cannot even put up a status as you would. So, erase all the bookmarks of Rumi quotes and poetries you wanted people to read on your WhatsApp status.

I am not the only one who is immensely bothered with the new WhatsApp update. There are people all over the globe who have reacted to it, and my word, some of these are very hilarious.

So, let’s find out what people have to say about the new WhatsApp update…

Hey There! I don’t feel like using WhatsApp. #WhatsappStatus #whatsappupdate

I just posted this WhatsApp story and I’ve never got so many messages… Seriously. NEVER.#WhatsappStatus opss#WhatsappStories pic.twitter.com/UykDFEwc3U

So @WhatsApp is the new @Snapchat !!! Did #Zuckerberg lose all his creativity & decided to become a follower in the market? #WhatsappStatus

RIP to those guys who used to show their love through #WhatsApp statuses. #whatsappupdate #WhatsappStatus

Is every app in the world going to turn into a snapchat story???#WhatsappStatus

Only 90’s kids will remember.#WhatsappStatus

Well, your reactions are on point!

What is your opinion about the new WhatsApp update? Do you like it? Hit in the comments what you think about it!

People Are Coming Forward With All Sorts Of Conspiracy Theories Regarding The Lahore Blast!
“Kab Tak?” Students Of LUMS Are Questioning The Recent Bombings In Pakistan In An Unconventional Way!
To Top