These Hilariously Clever Jeena Jokes From Mann Mayal Will Crack You Up! - Parhlo

These days one of the most popular dramas among popular dramas in Pakistan is “Mann Mayal”. Some love it, while others find it totally absurd and stupid and irritating. Jeena is one of the main characters of the drama portrayed by Ayesha Khan, but the character has been a subject to internet brutality and jokes because of obvious reasons. Well mainly because uske tou maa baap he nahi hain.

1. Malik Riaz to the rescue

When Malik Riaz decided to hear Jeena out and adopt her so she doesn’t have to complain about not having parents every single second. And probably get her a plot in Baharia Town as well.

Other Girls : I have a boyfriend

When you are single but at the same time you can’t even say  “Mere paas maa hai” . Why is God so unfair, Jeena?

She uses this sympathy card more than the average Pakistani teenager uses his mobile phone when he is in a relationship and has a call package. And you know just how much desi kids use their phones.

Atif Aslam will be so proud of this joke. And he is always talking about her, remember coke studio?
Qismat main meri chainn se JEENA likh de…

When Imran Khan finally stepped up and decided to help Jeena as soon as he comes in government. Which other leader would care as much about orphans these days? No one other than Imran.

But we all know sometimes Jeena gets really annoying and so do these jokes. Adam Levine said, and I quote, “One more freaking Jeena joke, I’ll be sick.”

One more Jeena joke and i'll make your jeena haraam! 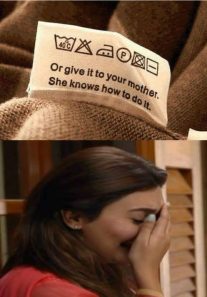 10 Amazing Gadgets You Need For Your Kitchen This Eid!
Why Sunni Should Support Shias On Youm ul Qudoos
To Top