Longtime dating couple Urwa Hocane, a famous actress and Vj and Farhan Saeed, well-known singer and actor are one of the most adored and happening couples of the industry. Their love story has officially been celebrated with wedding festivities held in Lahore this week and the fans have enthusiastically paid their wishes and happiness following the events.

The Fairytale Proposal – And She Said YES! 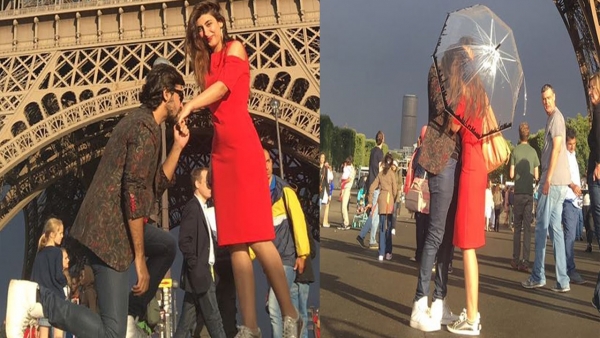 After many years of dating, the couple got engaged in the cutest way ever! Farhan proposed Urwa standing in front of the Eiffel Tower during their vacations together in Paris, in November 2016. This perfect fairytale moment was captured and shared on social media through Farhan’s Instagram and broke the internet the very moment. This indeed was an exemplary proposal gesture any girl would dream to experience. Lucky girl, Urwa!

Favorite Girls Jump In For A Perfect Bridal Shower

Like any other desi wedding these days, this celebrity wedding also started happening with an exotic Bridal Shower organized and celebrated with her best girls and of course her best friend and sister Mawra Hocane. It was perfectly decorated with pinks all around and Urwa wore a ravishing gown that made her look exceptionally beautiful.

Both families and friends gathered along to celebrate, sing and dance their joys all through the night for the Actress-Rockstar wedding fête. The dholki bash was apparently a simple yet elegant event in which Farhan was spotted wearing a gray kurta shalwar with a casual look while the bride pulled off a bronze and off white gharara that complemented her absolutely perfectly. The lovebirds also shared the mic singing “Abhi Na Jao Chor Kar” so adorable that it made everyone say “aww!”

Nikkah – A Sacred Ceremonial At A Sacred Landmark!

The couple tied the knot gracefully at Lahore’s historical Badshaahi Mosque where Urwa was traditionally dolled up in a sophisticated white bridal outfit while Farhan was seen in a white sherwani with cool shades and a stubble manly look. Mawra accompanied her sister carrying a traditional turquoise dress with intricate work on it.

A grand reception followed by all the ceremonials – An exotic Bridal Shower, fun packed Mehndi and Dholki, historic Nikkah and melodious and soulful Qawwali Night, was held on Sunday in Lahore where all the film stars and TV actors gathered to enjoy and give their best wishes to the newlywed lovebirds. The videos and pictures of the evening loudly showed that the event was a must to attend as it had way too many dance performances by Mawra and her squad.

The star-studded evening was followed and talked about by the fans of both bride and groom all along. The Hocane sisters, bride and Mawra, also performed a dance number together that cheered the crowd up with hoots and applause.

Farhan Saeed and Urwa Hocane are always loved and are one of the cutest couples of Pakistani TV Industry. Their wedding was always anticipated ever since they were known to be dating, thus they eventually delighted their fans with their wedding, that too with a bash of festivities of the wedding. As love makes you do anything and everything out of the box, we might also see Urwa singing along with her husband soon.

However, Farhan had already accompanied his wife in the famous drama “Udaari”. We wish the couple with the best of everything and all the good luck in the new and eternal role play in each other’s life for always.

Why I Am Against The Archaic Arranged Marriage Culture Of Pakistan
13 Pictures That Will Prove You Don’t Need To Travel Outside Pakistan To See Beauty!
To Top