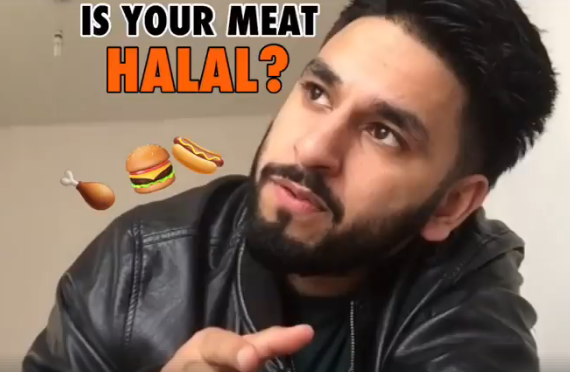 One of the most difficult challenges you’d face when living abroad would be finding Halal food – especially when your stay is in a non-Islamic country. A lot of students who tend to travel abroad for further studies have experienced the struggle of find Halal food. Many have compromised on eating vegetables rather than finding a Halal store which can be a daunting task.

Ali Shahlom, also known by his stage name Ali Official, is an English comedian and a television presenter and also runs his own Youtube channel – Aliofficial1. Ali has made multiple videos that often relate back to his Bengali heritage and culture, and have subsequently attracted a large South-Asian following.  His video on finding halal meat was a super hit amongst a lot, to which many could relate to! He was so on point! LOL.  Watch the video below:

"Is your meat #Halal" – Who's had one of these experiences before? ?

Hilarious? We thought so! If you’ve lived abroad and could relate to this, you know how it is. Ali could not have explained it in a better! We know there are people who would actually go out and search for Halal shops, but just in case, make sure they are actually HALAL! Despite the advantages, facilities you get living abroad, it sucks to be living there just because you can’t eat everything, you want! Isn’t it? Who can compromise on food?

If you’re a meat lover and moving abroad, get ready to experience this! What if you don’t have a meat shop near your place? Are you ready to turn yourself into a vegetarian? YIKES!

How many of you have actually experienced this? Don’t forget to tag your friends and relatives who are living abroad. What do you have to say about this? Tell us in the comments!