The most "Jahil" politicians of Pakistani politics! 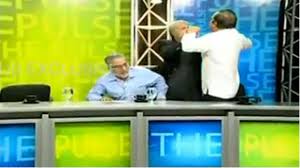 Politics is a tricky business in Pakistan. With the emergence of huge number of TV News Channels and Talk Shows, we witness the rage and rancor of our country’ politicians towards each other. In the quest to demean others and amplify their own opinion, they often cross the the ethical and moral limits. They rebuke, scold and even abuse each other while getting involved in steamy debates. well, most of us hate politics and thus hate politicians’ giving rhetoric every now and then. but, trust me, it’s not at all boring. I mean, if you’re depressed and have nothing to do , you can switch on TV channels and you may come across the fights and abuses between politicians. I’m not saying it’s something to be happy about or proud of, after all it’s the image of country being hurt, but on the lighter note, you can enjoy watching these videos comprising fights and abuses and have tad bit laughter on our beloved politicians.

1. First video shows the intensive blame game between PPP politican Jamil Soomro and PTI leader. Once the debate gets too steamy, Jamil Soomro throws off abuses and PTI leader throws glass of water at him. It’s funny to watch the person sitting in the middle scared in the beginning!

2. Here is another video showing Punjabi Politicians abusing hell out of each until they finally grab each other collars. Haha!. The Punjabi accent they use to abuse is hilarious!

3. This one is funny. Hasan Nisar takes on Mushahidullah Khan of PML-N. You will hear abusing each other. Hasan nisar calss him “Kutta” and Mushahidullah replies “Tum Kutta tumhara…” Watch the video of these two fighting.

4. This one is hilarious to the core. Anchor Mehr Bukhari witnesses complete hullabaloo in her show as Jamat-e-Islami leader and PML -N leader get involved in verbal duel where one calls other ‘MAALISHIAA’ evoking other to react bitterly. HAHA!

The fourth battle again shows Pakistani Politicans Sharjeel Memon. It seems as if he is a street goon of PPP ready to bash any one. This time he takes on Abid Sher Ali, leader of PML-N. The both starts off with full “Tu Turaak” leading to full abusive drama while the anchor seems hapless.

The last one again shows the Paksitni Politican Mushahidullah Khan, also know as ‘Dadageer’ of PML-N talking to Mehmood-ul-Rasheed of PTI. But, the the show is stolen by Faisal Raza Abidi initially as he takes on PTI leader. But, then it’s the PML-N ‘dadageer’ Mushahidullah taking on with PTI leader. Kudos Pakistani Politicians for at least making us laugh once in while by your fights on live talk shows, otherwise you haven’t given us much to be happy at.