No matter how corrupt our present government is, how shamelessly they react upon any blame, but on and off they produce such “tohfaaz” for the “ghareeb awaam” that they blindly select them for the next election terms. The Metro Bus project is one of the many ventures for which this government deserves a pat on their shoulders.

I have experienced to travel on the Metro Bus to and from Sadar Rawalpindi to Islamabad several times and every journey was entertaining yet an eye opener.

The Metro Bus has a system: from tickets to proceed to the bus and to enter or exit. But, alas! We Pakistanis. ….

You proceed to the ticket counter where you are supposed to stand in a queue but there are many who are in hurry and will try the best to push you to get the ticket while completely forget the fact that the bus will come and go in the fixed time. Now walk towards the escalators and try not to look around because some born tharkeez will be annoyed if you notice them.

When you at the ticket checking machine, there’s also a race to “me first me first ” or “mera number kab aaye ga” kinda people. In hustle, many of us touch the ticket (which actually a plastic coin) sensor wrong and the poor machine stuck resulting in a restless queue behind. The helpers hurriedly come to rescue the victim  (which is the machine, honestly) and all walk happily ever after. 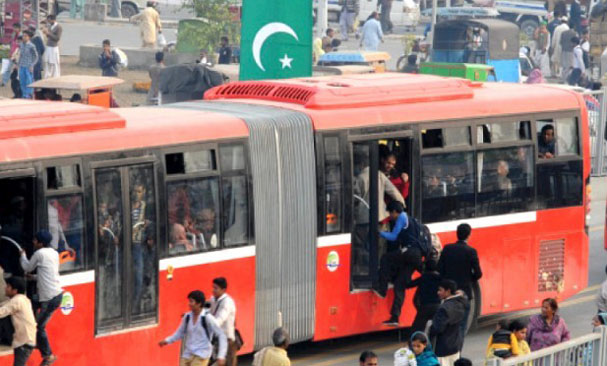 When the bus arrives, the waiting crowd rush towards it and try to enter no matter how many from the bus are trying to get out. As per rule or mannerisms, we should wait for the passengers who were already there and it’s their destination and we are pushing others and blocking the way. Obviously, we are in a hurry to take the seat but the seats are less than the actual usage.

Read Also: A Girl In Lahore Was Groovin’ In A Metro Bus And People Couldn’t Handle It!

The two gates are meant for the separate entrance of ladies and gentlemen but gentlemen always take that as their right to enter from the ladies’ side. I never saw a lady brave enough to use the gents’ gate for her entry or exit.

Now, here comes the real treat and fun. Inside the bus: there are two portions, one for gents and the other for ladies but gentlemen never bother to give the “kursi” to a lady, be it the government or the bus. Even there are two seats reserved for handicapped but who cares.

The scene is quite interesting; two seats (for handicapped ) are in ladies’ portion and already occupied by 2 “ghabroo jawans”. When a lady enters the bus and looks around, the 2 jawans just ignore and they two start peeping outside the window.  At last the poor driver sees from the mirror and announces on the speaker to leave the seat for the lady.  I don’t mean to say that the seats for handicapped shouldn’t be used by any man but as a gesture of etiquette, the seat should be offered to the woman without a need to announce.

There are instructions printed on the doorway that “don’t stand here”, but we will become deaf and dumb when it comes to following the rules. We will deliberately stand there and then will give a frowning look to everyone who asks us to step up or down or aside because standing there blocks the way of other commuters and this keeps happening throughout the journey.

When we enter the bus we all try to find a peaceful corner far from others where we could stand or sit easily without any disturbance in our music via earphones. This, again, is a trouble because we are unable to listen to any request of giving way. Commuters are coming and going but no one cares;  students are busy using the phones, ladies indulged in gossiping and guys staring at girls or looking around.

There’s the continuous warning playing on speakers to beware of pickpockets or take care of your belongings.  An announcement also keeps running about the station names or estimated time to the destination but who travels daily, doesn’t need to listen.

Due to the lack of sufficient seats, girls sit on the floor, again, on the printed instructions. Every time when doors open or shut, the one standing near it, feels angry to give way and the one who wants to step down,  murmurs “bees rupay de k bus khareed li hai inho ne”.

Once a member of the Transgender community was in there. Though it’s not a joke, nor a miracle, neither a serious problem if unisex travel among the “normal human beings “, but we treat them as an unclean filthy creature. He/She stood at the mid of the two portions because there always remains a gap between men and women standings. Few moved and made a room for him and few smiled. He was standing quietly but the man behind was just an idiot. He started humming a song particularly about black color which he/she was wearing.

When that unisex reached the destination, he moved towards the door but the mean people didn’t notice and froze. Meanwhile, he pushed by an uncle, and the uncle took a deep breath and grinned, the unisex said “aag lag gaee kya” and stepped out. Everyone chuckled.

I don’t know what happens in the men’s portion, but I am sure, that won’t be any different from women’s. Mostly at peak office hours, the bus is stuffed and there’s hardly space for standing, too. Pushing and pulling is a continuous practice because many of us travel in the public transport considering it as “baap ka maal”.

Unheard Cries of a Man – Harassment, Objectification, Bullying: Stories That Will Give You Goosebumps
Here’s How ‘Chamcha Giri’ Can Lead You To Success
To Top