the Malayalam Song of The Eyebrow Girl Gives References of Islamic History! 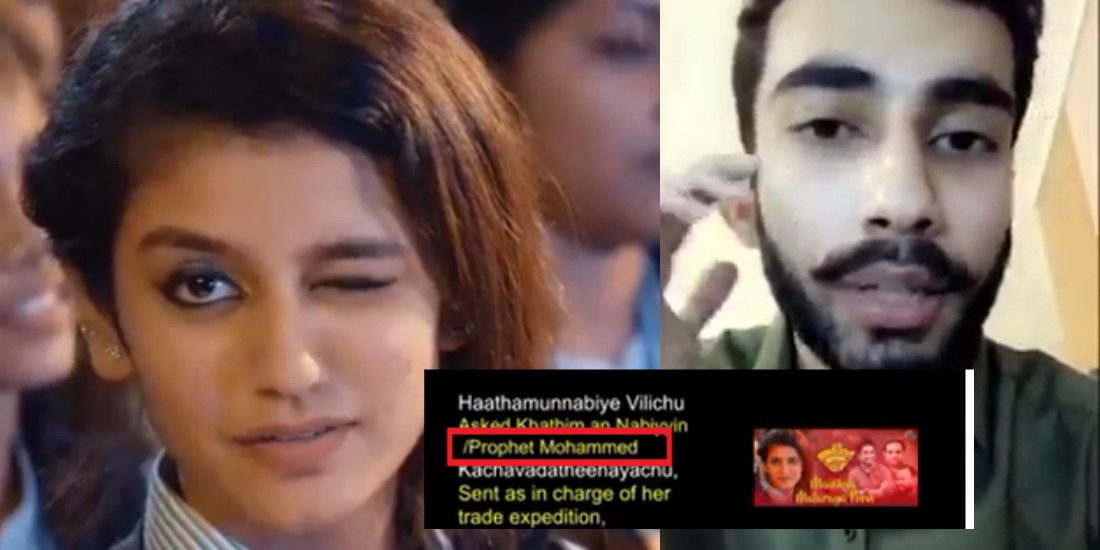 Reaching a point where people recognize you might sound like a process that involves immense struggle. But nowadays, it has all been made easy with the blessing of the internet where a number of “clicks” could make you a sensation in some seconds. This list recently got the beautiful Priya Prakash Varrier’s name added to it who won the hearts of people by her perfect eyebrow synchronization. The beauty with the famous wink is from South India. The popular video clip that is now shared on various platforms was taken from a Malayalam song “Manikya Malaraya Poovi”, of the movie “Oru Adaar Love”.

If you were also one of those who didn’t bother focusing on the lyrics because her looks had smitten you then brace yourself for a shocking news. A guy named Saud Abdullah made a video shortly in which he shared how he found the famous song disturbing unlike many other. Later, he revealed the reason that any Muslim would not like this song after knowing that its lyrics has words like “Khadija”, “Muhammad” and “Rasoolullah” which were being repeated again and again. However, many of us failed to notice it.

LISTEN TO IT, CAREFULLY

Now, knowing the exact lyrics, it reveals that it’s the love story of Bibi Khadija (R.A) and Prophet (PBUH). This fact makes us question that how was the picturization legit for the song being played in the background? It gets weirder and disappointing if we get to the details of it so it’s better to stop making it famous. Nonetheless, if you think it’s all a click bait, then try listening to the song now, after knowing the words that it contains.

DID YOU HEAR “KHATAM-E-MUN NABI”?

Thank you for all the love and support💙

The clip was smartly uploaded to make people overlook more parts of the songs. It’s not only a short clip of 1:30 seconds but a whole 3:17 minute song that no one bothered to click on. If you still couldn’t find it then here’s a link to it.

No doubt the translation was a big barrier that didn’t let many of us know the exact meaning of the song. But, now you know it, so stops sharing it anywhere because the picturization is very suggestive as per the lyrics of it. If you liked the article then don’t forget to like, share and comment down below. Plus tag more people to let them know about this.