The Maids And the Madams

No rest, no sleep, no day off just do as we say.When the whole world is passing new laws and regulations on how to deal with the domestic employees, we in Pakistan, are still using them as our personal slaves. Unlike many other countries where your rights are protected by the law, here it all comes down to the personal goodwill of the employer.

Sexual abuse, harassment and physical abuse have just become daily news on the headlines of most amazing TV channels. Physical abuse of domestic workers has increased in the recent years or we can put it in this way that people have started reporting it, psychological abuse is very common but is never reported because of the fear that they will lose their job and even if they do report it to the concerned authorities, they are never going to take any action.

Social media is playing an active role here, if highlighted by media, the prosecution may be done but other than that no one helps these people who are thought to be just slaves. 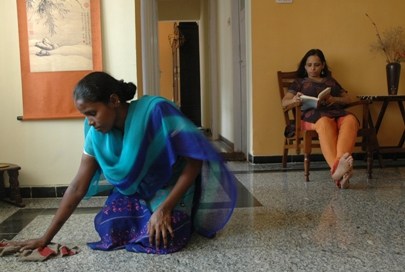 As we see people love to eat at fancy restaurants and other high-end places with their maids so that while they are having their scrumptious meal, the workers make the kids eat their food or hold the Madame’s bags but never make them eat what they are eating. They feel left out. Ever thought of them? Are not they humans? Are they emotionless slaves? No, they are not.

They might also miss their parents, kids aged 12-16 are preferred to work because they are thought to be less cunning and might not steal from the bosses. The shopping malls, a great example for us, when we see madams shopping and the maids holding their kids in their laps, so they can shop, eat and talk to their friends easily and their kids may not distract them.

This is the problem with our society, everyone has to feel superior, we want to be pampered, we want to look rich and fancy, I have seen people asking other people, how many maids do you have? This is not a competition, you are allowed to keep maids but think of them as your family members, not as your slaves.

Not all people are the same, I have also seen people ordering separately for the maids, even when they are eating at fancy restaurants, educating them, treating them nicely but when we talk, we take the majority into consideration and the majority is not treating them well. If they are poor and needy, it does not give anyone the right to treat them as slaves.

Every Girl Who Wears Make-Up Needs Try These 6 Things In Summer To Keep Her Skin Fresh!
An Open Letter To All My Pre-Teen Sisters
To Top