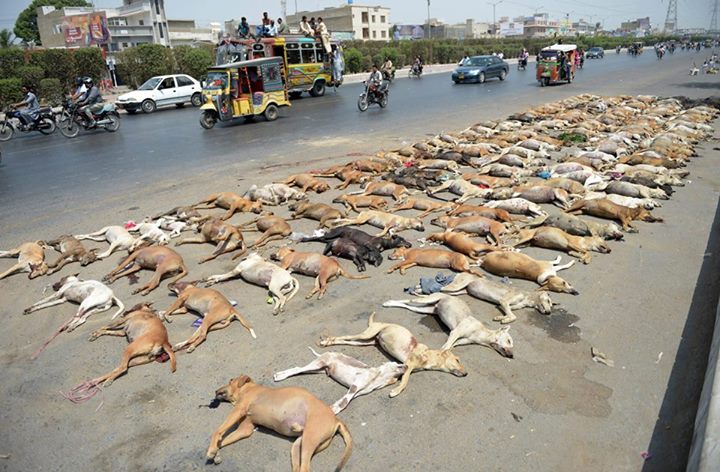 Commuters drive past a pile of dog carcasses at the road side in Karachi on May 12, 2015.

The city municipality has launched a campaign to eliminate stray dogs whose numbers are increasing alarmingly.

This heart wrenching picture was posted on the Dawn News on May 13th 2015, highlighting the campaign started by the Municipality Karachi to clear the streets from these ‘Not Trained’ and ‘Dangerous’ Stray dogs. This campaign is not happening for the first time in any country, but what the picture shows, is surely the only kind of such campaign we have seen in our lives.

It is hard to believe that the people whom we have elected to protect us and our property, are too busy killing the same property we wanted safe. It is depressing to see that the these so called ‘Devoted Members’ of our society could not come up with any other solution for this problem.  It is just like killing someone for being poor and sleeping on the streets, it is not their fault, is it? If these dogs were a threat to the pedestrians, caging them could have solved the problem, No?

This picture has left many of us speechless, only a heartless person would find nothing wrong in this action, this was the last thing any municipality could do to overcome such problem, like even the dumbest kid on this planet would bring a better solution to this problem first. It is not like these dogs have become Dinosaur all of a sudden that they are going to destroy the whole population or they are a threat to our national security. It is a matter of shame for all of us, that we have now become a part of a society who has found ‘Killing’ as the solution to every problem that prevails in this country.

In the end through this platform, we urge the concerned authorities to take notice of this action and do something about it, before God takes notice of this and the whole population suffers just because of some idiots. We also offer our support in finding better solution for this problem and for creating a platform to bring the local population on-board to play their role in guarding animal rights, so that if not humans, atleast animals can live peacefully in this country.

For the person who decided display these dead bodies on the streets, Sir, you have successfully bagged the award for being the ‘Most Heartless Person In Pakistan’, we have no words to tell you how big of an idiot you are. Just a one minute of thought process might have saved you from being like this, but No, thinking is too mainstream, why would you do that ‘Mr intellectual’.  SHAME ON YOU!!

Meet The Most Hated Guy On Instagram! His Photos Will Make You Hate Him Too! (18+)
13 Most Awesome Moments of Pride and Joy at The Gaddafi Stadium
To Top