“You never spend anything but you will be rewarded for it, even the morsel of food that you lift to your wife’s mouth.” Narrated by al-Bukhaari, 6352; Muslim, 1628.

Housewife – a profession that we all, or most of us, think is not even worth appreciating, yet when we do not see a housewife doing her “job” we quickly realize that the house is a mess. It is the one profession that is hugely undermined and its sole responsibility is put on a wife the minute she steps into her new home.

In Pakistan, the practice of dropping all responsibilities of a family on the new bride is a common one. A woman may go through a lot of hardships, enduring pain and, in some cases, torture and insults from her in-laws as she becomes accustomed to the family tradition and environment. If only did her husband know how much responsibility he has to share on her behalf, then life would have been easier.

In a typical desi family, helping your wife with household chores and responsibilities is one Sunnah that has seldom been practiced. Both by family traditions or social culture, it is now a trend to think of a man as an engine of a family, providing sustenance and generating income. Meanwhile, his wife looks after his parents, family, home, and children. To think that one’s responsibilities outweigh the other’s is a grave mistake and we have been doing this for generations. 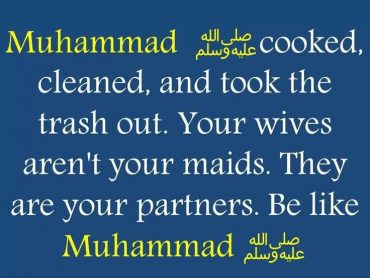 Husband Helping In House In The Light Of Sunnah

Although scholars like Imam Malik, al – Shafi’e, and Abu Hanifa constantly urged to treat the wife as an equal, that serving her husband by looking after their home is completely optional, most of us like to think otherwise. However, it has been narrated in Sahih Bukhari that once Hazrat Aisha was asked: “What did the Prophet (PBUH) do in his house?” She replied:

“He used to keep himself busy serving his family and when it was the time for prayer he would go for it.”

Indeed, Prophet Muhammad is the best among men, and when he himself looked after his family and home, why are we so arrogant to drop this responsibility as a burden on our wives?

Mihnah – A Profession Implemented On Both

One thing important to note in the above mentioned Hadith is that an Arabic word of “Mihnah” is used in the Arabic verse. This literally translates to work or profession. This implies that serving family and looking after a home is considered as a profession equal to other professions of this world. 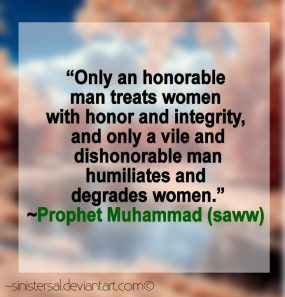 The notion here is that it is not degrading for a man to provide a helping hand to his wife at home. In fact, there is another event in which Hazrat Aisha stated:

“He did what one of you would do in his house. He mended sandals and patched garments and sewed.” (Adab Al-Mufrad graded sahih by Al-Albani).

There is a reason why the Prophet (PBUH) has mentioned: “The best of you is the one who is best to his wife, and I am the best of you to my wives.” (Tirmidhi; Ibn Majah)

There is nothing feminine about keeping your wife happy by helping her at your own house. The life our Prophet Muhammad (SAWW) is an ideal patch for Muslims. Given so, we must learn from him and his behavior towards his wives is one of them.

Karachi Has Been Struck By Another Heatwave, So Here Are 6 Useful Tips To Help You Get By
کیاصرف کلبھوشن یادیو، عزیر بلوچ جیسے لوگ ہی پاکستان کے دشمن ہیں
To Top