Teenage Photographers Dangling At The Top of A Skyscraper To Take Selfie! [Video] - Parhlo 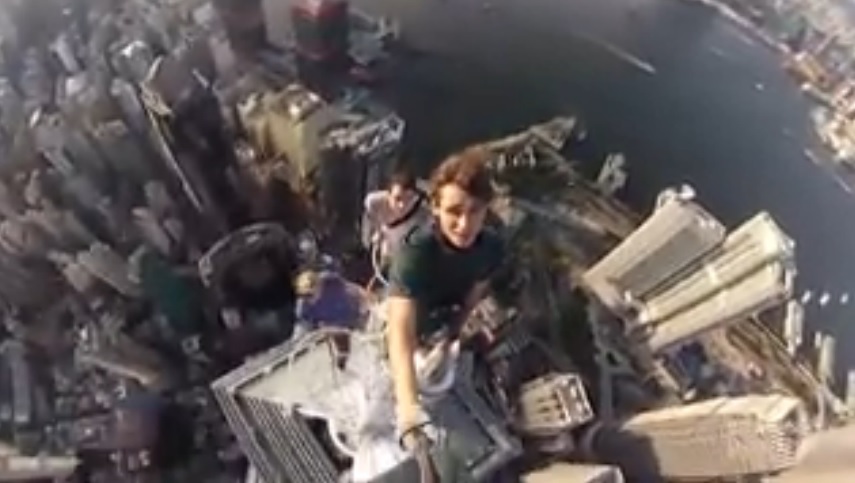 This trilling video captures a group of fearless photographers taking Selfies on top of a skyscraper in Hong Kong.

The pictures were taken by using a specially adapted selfie stick.

Photographed at heights of more than 360 meters in the air, the images show the group of photographers dangling by one hand and also tip-toeing across the ledges.

The group of young photographers appeared to be completely fearless! They ventured around Hong Kong to search for any building that caught their attention.

Despite of the risk that a slip would cost them their lives, the intrepid friends were focused on capturing the sprawling urban landscape as never seen before.

Alexander Remnov, 19, the fearless teenage Russian photographer has now added the towering harbour to a list of international cities that he has climbed.

While talking to the media, Alexander said:

“There was one dangerous moment when we tried to get the top of The Centre tower, it became to crowded at the top and there wasn’t enough room for three of us so we decided to go back down. We were lucky not to meet any police, but we did have some discussions with guards.”

He added: “Once we explained our mission to them and then showed them our cameras, they simply smiled and let us free. Hong Kong is one of the best places I have visited but I think I would need more than a month to visit all the best view points.”

Alexander concluded: “We don’t know what city we will visit next but we’re certain it’s going to be a city with skyscrapers!”

Also See: 29 Photos That Show The True Meaning Of Playing With Death. These People Are Mad (PICS)

Pakistani and Indian Cricket Fans Punched Each Other During The Match! [Video]
Truth Behind Pakistan’s Loss Against India in Cricket World Cup Match Revealed!
To Top