An IBA Sukkur owned school just fired their physics teacher, Shahroz Shaikh, because he was smoking during an online class session. As disturbing the thought of watching the teacher smoke sounds, it was indeed unimaginable to carry on an entire session. However, parents and students were repulsed by this stance and the news went haywire. 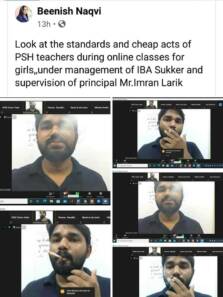 However, like always there is also another side of the picture. In order to clear the air, Shaikh finally planned to address the issue himself and rectify matters. The question is whether will this give him leverage or make matters tad bit worse for him in the future?

The school teacher shares the other side of the story

The IBA school teacher, Shaikhfinally took it to social media to mention how people are only portraying the half-truth of the actual situation. He admits to the fact, that he was indeed smoking and as a matter of fact it is his own video. However, there is a minor error in the entire scenario – he wasn’t smoking during the online class session, but before it.

Shaikh explains in a video that basically the session hadn’t even started and he was only admitting the students in the video session so that he can begin the class in one flow. During this time period, the class hadn’t started and while he was admitting them one by one, he decided to smoke. Hence, according to him, he is innocent as a peach!

True story behind my viral pictures and video Listen completely..

Although, Shaikh claims that he didn’t intentionally smoke during a session and that he was only admitting students in while he was smoking. the fact is that he was still doing so while on camera. He adds that he forgot to switch the camera off, which is why it was a human error.

Will people really accept this as an apology? Or will they also see it as the other parents saw it? Unethical and immoral. As of yet, nothing can be said about the situation. And we are unsure if Shaikh will get his job back.

One thing is certain, there is a highly likable chance that no school teacher will now avoid smoking during an online session or any class session in the near future.

WATCH: This Cute Pakistani Boy Is Winning Hearts As He Requests Schools To Reopen In Viral Video
Pakistani Madrasa Students Qualify For The Final Round Of Turkey’s Biggest Tech Festival
To Top