Sometime back, the heartthrob of the nation, Feroze Khan announced on his Instagram account that he was soon to be married, breaking a lot of fragile hearts in the process. The famous actor was finally off the market, and now, pictures of his nikaah have gone viral on the internet.

Many believed that Feroze Khan was going to marry his best friend of childhood and budding actress Sajal Aly. But the rumors were put to rest when people dug out his future wife’s name, which is Syeda Aleezay Fatima Raza, who lives in Karachi. 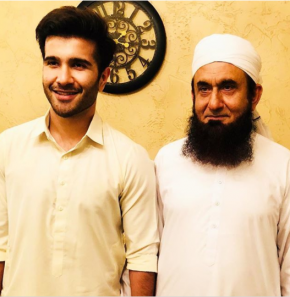 Feroze’s wife is not part of the media industry and as said by the actor himself, their relationship was pretty damn serious. Yesterday, pictures of Feroze Khan’s nikaah went viral on the internet, showcasing the most renowned Aalim of the country, Molana Tariq Jameel Sahab. As stated by Feroze, the marriage was a private family affair, where people form the industry were not invited. The actor was also successful in not sharing his wife’s pictures with the rest of the country, as the only photos that emerged showcased him and Molana Tariq Jameel Sahab.

I don’t have the words to express how blessed I feel meeting Molana Tariq Jameel Sahab. ✨?? pic.twitter.com/OveSvYNTVq

Some other names of the industry, however, were present on the occasion, such as journalist Waseem Badami, Jamal and late Junaid Jamshed’s eldest son, Taimur Junaid Jamshed. Feroze Khan wore a white Shalwar kameez on his nikaah and looked extremely happy, as the pictures suggest.

Previously, Feroze’s elder sister and renowned actress Humaima Malick requested people to not invade Feroze’s privacy and wish him best on his marriage. This is what she stated on her Instagram: “I repeat it’s a family affair, kindly send duas and blessings for Feroze and our family.”

Feroze khan being a famous actor and a heartthrob could’ve gotten any girl he wanted, not to mention all the available actresses but instead he decides to settle for an arranged marriage with a desi girl his parents selected for him, a girl he didnt know before. A true gem he is.

I’m not getting it..
I just read that Humaima MALIK reacts on media not giveing her BROTHER feroze KHAN’s wedding some privacy
HOW ON EARTH IS THIS POSSIBLE?? ?‍♀️
Humaima MALIK and Feroze KHAN are siblings????
?