PM Imran Khan’s Ehsaas Relief telethon where the premier raised a decent amount of money to fight the disease, led to a lot of controversies. The telethon featured prominent cleric Maulana Tariq Jameel as well. Together, the duo prayed for ease in these tough times.

However, the direction of the telethon soon changed and Maulana Tariq Jameel’s prayers got a little too controversial. Apart from praising Imran Khan and his governance, Tariq Jameel took shots at ‘lying journalists’ and ‘behaya women’ in Pakistan. 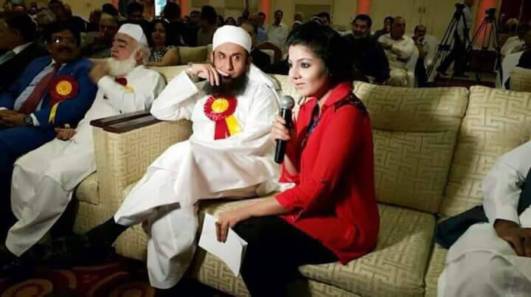 Due to the numbers and influence of the journalists, Maulana Tariq Jameel came live on TV and presented a public apology. Especially for Hamid Mir and Muhammad Malik among some other big names.

The journalists, even though lofty, accepted Maulana Tariq Jameel’s apology for calling them, liars. Journalist Muhammad Malik reminded Maulana of how hundreds of journalists in the country and laid their lives for the cause of presenting the truth. To label them as liars was an utter disrespect to their profession and the country.

On the other end, the Maulana after saying that such pandemics are resonation of Pakistan’s ‘behaya women’ who dance and party, has seen a lot of criticism. Since the speech went viral, the Maulana has refrained from commenting on the issue. Recently, the HRCP condemned his comments as well.

The Maulana in his speech had said: “Who has torn honor to pieces in my country? Who makes my country’s daughters dance? Who is asking them to wear skimpier clothes? Whom should I hold accountable for this sin?”

Many at this particular statement even pointed out how such a culture was vibrant in Pakistan Tehreek-i-Insaaf’s rallies and protests before coming into power. Even though an apology to journalists has been given by the Maulana, angry women of the country continue to slate him on social media.

This, in context, means that Maulana Tariq Jameel is standing firm by his statement. After his apology to journalists, Hamid Mir went on to remind Maulana how many think he is good at committing mistakes and then apologizing and had made it a standard practice.

No apology for Pakistan’s ‘behaya women’?

For over 48 hours now, social media remains full of jabs and digs at Maulana Tariq, who continues to trend as well. Subsequently, PM Imran Khan also did not stop the Maulana or correct his words.

Human Rights Minister of the PTI government, Dr. Shireen Mazari, however, was not too pleased. “This simply reflects either ignorance [about] pandemics or a misogynist mindset. Absolutely unacceptable,” she said on Twitter. “We will not accept the targeting of women on the pretext of such ludicrous accusations.

She further labeled Maulana’s comments as ‘completely absurd’. As of now, the ‘behaya women’ of Pakistan are waiting for an unconditional apology from Maulana Tariq Jameel.