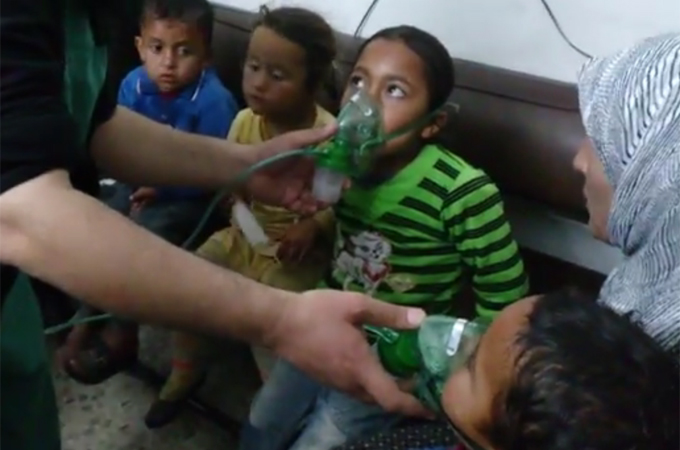 The Syrian government has been accused of new attacks on civilians with improvised chlorine gas bombs, in the latest reports of chemical weapons use in the Syrian war.

Several videos posted on Youtube on Wednesday, April 16, show what is said to be victims of chlorine gas attacks in the northern Syrian town of Kafr Zita, in the governate of Hama.

One video shows what appears to be a night time attack on the town. Others record civilians wearing face masks being taken into what appears to be a medical centre. Women and children, wearing oxygen masks, are then seen being given oxygen, although they do not appear to be in major distress.

For all the world, if you want to prove the Assad crimes … come to us, come to Kafr Zita.

In another video a man, who appears to be a medical worker, states in English: “They attack us… in chlorine… in gas chlorine. Now in the middle of our city they attack and many person have toxic injuries. What will we do? Every day, every day they attack our city.”

In a separate video, dated April 16 but shot in daylight, two men show the remnants of two cylinders they say landed in the town. The cylinders bear the inscriptions CL2, the chemical symbol for chlorine gas.

Towards the end of the video, one of the men says the regime of President Bashar al-Assad was responsible for dropping the bombs.

In English, he states: “For all the world, if you want to prove the Assad crimes [and use] of chemical bombs, we have good proof, excellent proof. Come to us, come to Kafr Zita, and we will show you all the proof about Assad’s crimes.”

The videos were created by Youtube users and collated by the Britain-based blogger, Brown Moses. They cannot be independently verified by Al Jazeera.

Both rebels and the regime have said chlorine gas has been used on the town. State-run television on Saturday accused the al Qaeda-linked Jabhat al-Nusra of carrying out attacks, which it said wounded dozens.

Assad’s forces have been repeatedly accused of using chemical weapons during the war in Syria. The largest known attack used sarin, a much deadlier nerve agent, on civilians in the rebel-held area of eastern Ghouta last year, leading to the deaths of hundreds of people.

Both the rebels and the Syrian government blamed each other, while material gathered by UN inspectors found strong evidence of the use of sarin but did not apportion blame.

Under the terms of a deal struck last year by the US and the Syrian regime’s principal ally, Russia, Assad agreed to give up all of his chemical stockpile.

But the Syrian government failed to meet a February 5 deadline to move all of its declared substances and precursors, about 1,300 tonnes, out of the country. Syria has since agreed to remove the weapons by late April.

Chlorine is a so-called dual-use chemical and was not among the chemical agents declared by Assad under the deal.