Pakistanis are known for their hospitality and welcoming nature still, it always feels nice to be appreciated for being the best host ever! This Swiss man has done just that and termed his travel experience in Pakistan to be ‘the best trip ever!’

Sos Gratin from Switzerland loves paragliding. When he started paragliding, his instructor told him something he never expected!

“From the very beginning of my instruction, my paragliding instructor told me that, for him, the only mountains he had ever seen that were more beautiful than Switzerland’s, were in Pakistan. So I decided that one day when I had gained enough experience, I would go there.”

Like many, Gartin also had his reservations before coming here, “I have to admit that I wasn’t very sure if Pakistan was safe. And the information I found on the Internet wasn’t very convincing.”

Nevertheless, his passion for paragliding brought him to Pakistan. “I flew in many other places; The Himalayas, Andes and The Alps” but his instructor’s recommendation stayed with him.

“My experience in Pakistan was incredible and beyond anything, I could have imagined! Within the first days, after seeing how friendly and welcoming the Pakistani people are, all of my apprehension was gone,” he said.

“Having traveled a lot, this was the first time I felt welcomed to this extent, and upon meeting other tourists, they all agreed that the Pakistani people are very welcoming people.”

Upon coming across the spectacular mountain Gartin overcame with joy. 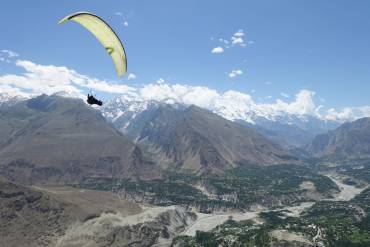 ‘Pakistan has the best mountains’

“Pakistan has the most impressive mountains for flying, some of the most beautiful I have ever seen!”

Everything was going great until unfortunately Gartin had a flying accident and sustained some serious injuries.

“Everything was going great and but then, after three months of fantastic flying, I crashed due to my own stupid mistake.”

Gartin was rushed to Government City Hospital in Gilgit where Gartin believes he got the best treatment unimaginable.

Gartin had a terrible accident in Gilgit

“As I arrived at Govt City hospital in Gilgit, they took numerous radiographic scans and discovered that I’d broken a few bones. Once I knew that I’d have to get an operation I thought of going back to Switzerland.” 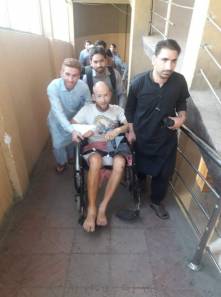 Once again Gartin’s reservations came creeping in and he became doubtful.

“But then I met Dr. Kaleem, who convinced me that, according to what I had, it was best to get my surgery done there, due to the risks of waiting. I decided the best thing to do was to trust him. The surgery went very well and once back in Switzerland, they praised the work that Dr. Kaleem had done!”

“Furthermore, after insisting on making payment for my surgery and hospital stay, I was advised that since I am a guest in Pakistan, all expenditures would be free!”

Gartin’s fear of loneliness on the hospital bed was also dismissed as people keep coming to the hospital to keep their guest company. 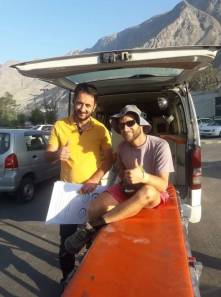 “During my stay in the hospital, many people whom I’d never met came when they heard I was alone; to see if I needed anything, from bringing me delicious food, to keeping me company.”

“They came because they are nice people with a community-based culture that genuinely takes care of their guests. Even now, after many months in Switzerland, people are still asking after me!”

Lastly, Gartin thanked the people of Pakistan and the Staff of Gilgit hospital.

“The way people took care of me, this was a real highlight that will stay in my heart forever. Thank you so much for your warm welcoming Pakistan, I really hope I come back soon!”

Also Read: This Couple Traveling The World On Bikes Now Reaches Pakistan And They Love It!