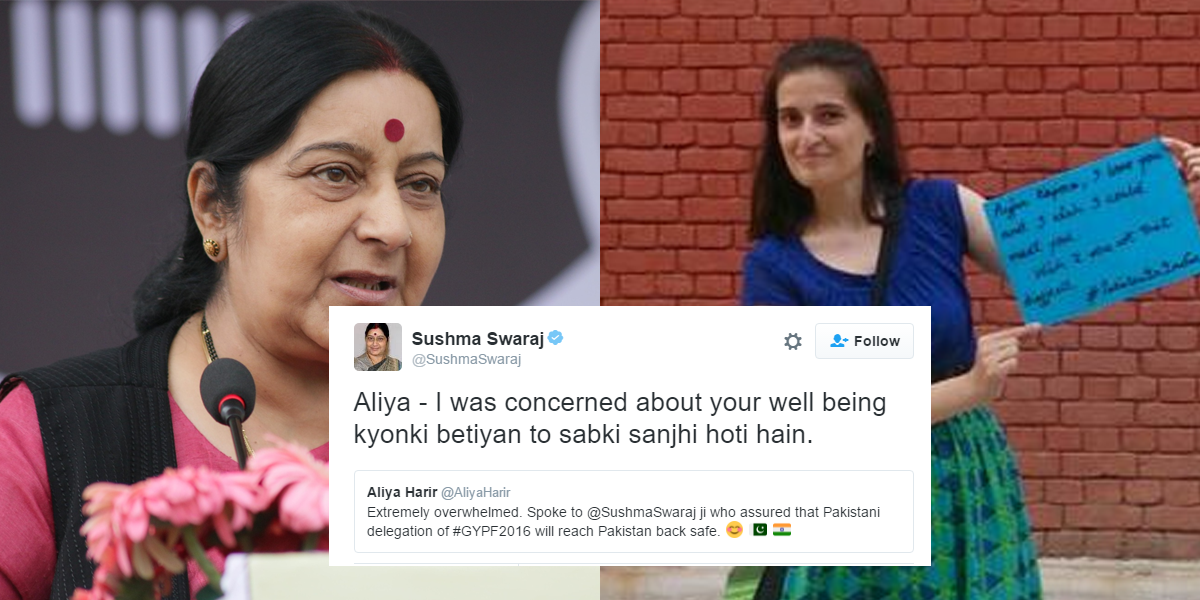 India Pakistan – arch rivals, extreme haters and given the recent events, the hatred between these two nations seems to be rising.

Sushma Swaraj – India’s Minister of External Affair never leaves a point where she can insult Pakistanis and show her hatred for the nation. Even in the recent UN speeches, she tried to bash Pakistan in every way possible. However, it seems like she does have a soft spot for Pakistanis.

Recently, 20 girls formed a group – Aghaz e Dosti and went to India to spread peace and love between the two countries. They participated in the 11th Global Youth Peace Festival and the leader, Aliya Harir made quite an impact in the festival. Being the leader, she won the Activism and Exemplary Youth Action award as well. What else she one was Sushma Swaraj’s heart.

Aliya tweeted this before her return to Pakistan

Extremely overwhelmed. Spoke to @SushmaSwaraj ji who assured that Pakistani delegation of #GYPF2016 will reach Pakistan back safe. 😊 🇵🇰 🇮🇳

In response, the minister replied this:

Aliya – I was concerned about your well being kyonki betiyan to sabki sanjhi hoti hain. https://t.co/9QyeMQfRwy

Given what Sushma Swaraj replied, it sure seems like she does not hate all Pakistanis and things can become better sometime.