Been almost two weeks since the tragic demise of Sushant Singh Rajput. As the actor’s family tries to come to terms with his devastating loss, they have decided to honor his legacy. The family wants to honor his memory and celebrate his passion for cinema, science, and sports.

According to some sources, the family of the ‘Kai Po Che’ actor, in an emotional statement, said: “We can’t bring ourselves to accept that we wouldn’t get to hear his easy laughs anymore. That we wouldn’t see his sparkling eyes again. That we wouldn’t hear his endless rants about science again. His loss has created a permanent, glaring void in the family that will never be filled.” 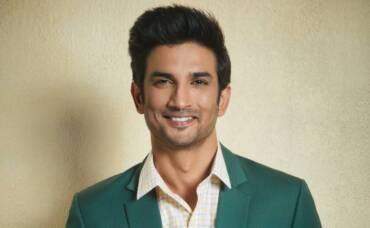 The actor’s family further added to their statement that Sushant was a ‘free-spirited person’ who worked hard to turn his dreams into reality. They have described him as ‘talkative’ and ‘incredibly bright’.

In addition, they also shared how curious he was about just everything. How he dreamed without restraints and chased those dreams ‘with the heart of a lion’. Added to the statement, “He smiled generously. He was the pride and inspiration of the family.”

Sushant was found dead in his Bandra apartment on June 24. There was an ongoing debate circulating on the Internet that the actor was somehow murdered. However, the final post-mortem report has ruled out foul play. It has confirmed that it is a clear case of suicide.

The deceased’s family has decided to set up the Sushant Singh Rajput Foundation (SSRF) to honor his memory and legacy. The foundation will support young talents in areas close to his heart- cinema, science, and sports.

In addition, Sushant’s childhood home in Rajiv Nagar, Patna, will be turned into a memorial. All of his personal memorabilia and belongings will be on display for all his fans and admirers. This will include his thousands of books, flight simulator, and his Meade 14″ LX-600 telescope.

The actor who is known for his passion for science and sport will always be remembered. Not only will he be remembered for his on-screen appearances, but also for the devotion he brought to a character and his stick-to-itiveness.

Besides this, with an aim to honor the legacy of Sushant, the family has also decided to maintain his social media pages. As much as they are trying to wrap their head around his death, they are trying to do everything to keep his memories alive.

The family who adoringly called him Gulshan, has taken it to social media and said a final goodbye to Sushant. 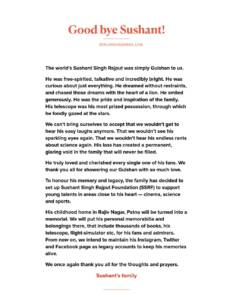 Sushant’s sudden demise had taken everyone by surprise. It shocked everyone to the core. The actor made his Bollywood debut with “Kai Po Che!” in 2013. He had featured in a lot of hits in the past few years. His biggest hits were Neeraj Pandey’s ‘MS Dhoni: The Untold Story’ and Nitesh Tiwari’s ‘Chhichhore.’

The actor’s last movie ‘Dil Bechara’ has premiered online recently. On Wednesday, the Mumbai police ruled out any criminal offense in Sushant’s case. The final post-mortem report has confirmed that it was indeed a suicide. Sushant’s family had alleged earlier that he was murdered.