Bollywood actor Sushant Singh Rajput committed suicide on Sunday. The shocking news has disturbed many. However, soon after his death a list of his last few wishes from his personal diary has now surfaced online. We are surprised and saddened at the same time to see that one of the actor’s last few wishes were to attend Pakistani singer Abida Parveen’s concert.

The ‘Raabta’ actor shared his wishlist on Twitter and Instagram at different times. In 2018, using #lovingmydream he shared his wishes on Instagram. It has various goals that the actor sought to achieve in his life. It also consists of attending a concert of legendary Abida Parveen.

Also, fulfilling the wishes of 100 mothers and building the biggest library of India. And Sushant does have some wishes that are too materialistic too such as owning the most expensive car. Moreover, his love for Hollywood actor Robert Downey Jr. is also evident. His list also marks one of the things like clicking a selfie with the actor in his Iron Man outfit. 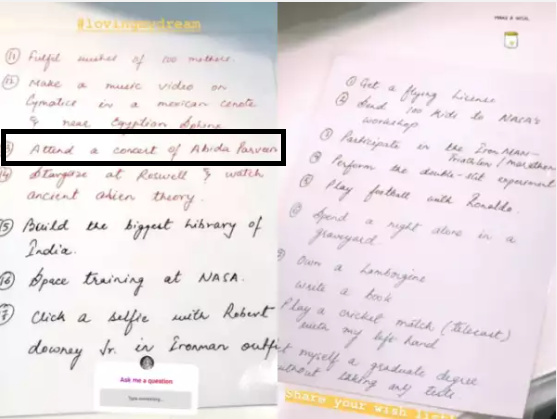 Also in 2019, Sushant curated another list of his 50 biggest dreams that he wanted to accomplish on Twitter. A list of dreams ranged from training for Iron Man triathlon to playing a cricket match left-handed and write a book.

8. Chart trajectories of Moon, Mars, Jupiter & Saturn for a week
9. Dive in a Blue-hole
10. Perform the Double-Slit experiment
11. Plant 1000 Trees
12. Spend an evening in my Delhi College of Engineering hostel
13. Send 💯 KIDS for workshops in ISRO/ NASA
14. Meditate in Kailash pic.twitter.com/x4jVGp4UJS

Learn how to Farm
36. Teach dance to kids
37. Be an Ambidextrous Archer
38. Finish reading the entire Resnick – Halliday physics book
39. Understand Polynesian astronomy
40. Learn Guitar Chords of my fav. 50 songs
41. Play Chess with a Champion
42. Own a Lamborghini pic.twitter.com/bnVoLcFaij

Sushant had miles to go before his untimely death. Life isn’t fair to all, but giving up is never a solution. No suicide note has been found in his home, while his family has refused to accept that he committed suicide. Meanwhile, the world mourns the death of a young and promising Bollywood actor.

On Sunday afternoon, the actor’s team also shared a statement on behalf of his family. “It pains us to share that Sushant Singh Rajput is no longer with us. We request his fans to keep him in their thoughts and celebrate his life, and his work like they have done so far. We request media to help us maintain privacy at this moment of grief,” read an excerpt from the statement.

You Won’t Believe, Why This Man Divorced His Wife Two Days After Their Marriage
‘Help My Twins Meet Their Father Stranded In Pakistan,’ Begs Dubai-Based Mother
To Top