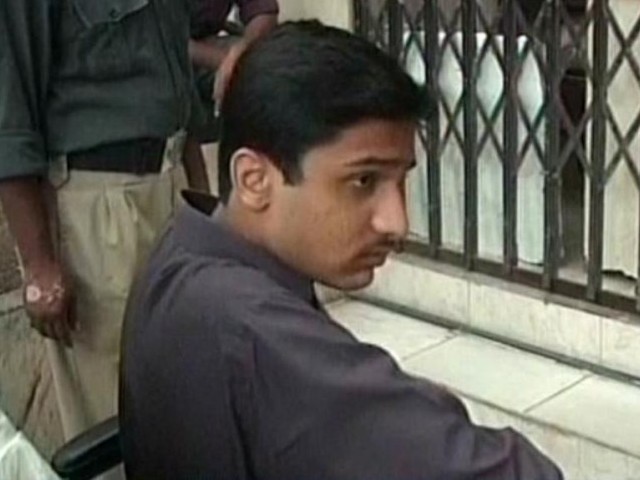 KARACHI: A medical board declared on Monday Salman Abro, the main accused in the Suleman Lashari murder case, a minor, Express News reported.

The report was presented during a hearing of the case in an anti-terrorism court (ATC) in Karachi.

An 18-year-old Oâ€™ Levels student, Suleman Lashari was gunned down at his house in Defence Housing Authority on May 8. He was allegedly killed by the main accused in the case, Salman Abro, who is the son of Sakrand Police Training Centre SSP Ghulam Sarwar Abro.

According to the report of the medical board, which was formed a day earlier, the main suspect is between 17 and 18 years of age.

Expressing reservations over the medical boardâ€™s findings, the prosecutor claimed that the report was incomplete while Lashariâ€™s family said that they will challenge it in a higher court.

On May 27, the defence counsel had requested the court to treat Abro as a juvenile and send him to Karachi’s Youthful Offenders Industrial School as he was underage.

Maroof had also contended that the defence did not submit an application to determine Abro’s age and at this stage, the court cannot send him to a juvenile detention centre.

Adjourning the case to July 17, the ATC today ordered the police to send Abro to a juvenile jail.

Lashari was shot dead at 2 am on May 8 while he was studying in his balcony. The young man was allegedly targeted by the SSPâ€™s son who came to Lashari’s house along with five police constables to settle an argument.

The guards deployed at Lashariâ€™s house had retaliated and the victimâ€™s brother Zeeshan had also joined in after getting his weapon from his room.

Salman was also injured in the exchange of fire and one of his police guards, constable Zaheer Ahmed, was killed. The incident had also left Lashariâ€™s guard, Ali Bugti, injured.

On June 13, the police submitted the charge sheet against the suspects in the murder case.

Quoting Lashariâ€™s brother, investigators revealed that Abro and Lashari had an altercation when Abro tried to overtake Lashariâ€™s vehicle at Sea View, days before the former allegedly killed the latter.

In the charge sheet, the police had also inserted Section 457 (trespassing or breaking-in by night in order to commit an offence punishable by imprisonment) against the suspects, after determining that the suspects had forcefully entered the victimâ€™s house with the intention of killing him.

The charge sheet also states that Abro and constables Maqbool Ahmed Brohi, Imran Ali Arain, Yaseen Jamali and Muhammad Rashid are in custody, while deceased constable Zaheer Ahmed was listed in Section 2 of the charge sheet.

A case was registered under Sections 302 (premeditated murder), 324 (attempted murder), 427 (mischief causing damage to the amount of fifty rupees) and 34 (common intention) of the Pakistan Penal Code, read with Section 7 of the Anti-Terrorism Act, 1997, on a complaint of a brother of the deceased at the Darakhshan police station.

Punjab Law Minister Rana Mashood speaking to media in Lahore.
This Woman Had Her Face Photoshopped In 25 Countries To Compare Their Beauty Standards. The Results Are Pretty Amazing.
To Top