Since the global pandemic hit us, the government of Pakistan has heaps of difficulties on their shoulder. From the budget to corruption and to catering to the people infected from the pandemic itself.

The imposition of online classes

In order to sustain the public from getting affected by the virus, a lockdown was imposed. Moreover, all those enrolled in semesters and schools were told to have online classes for the sake of passing exams and the respective year. 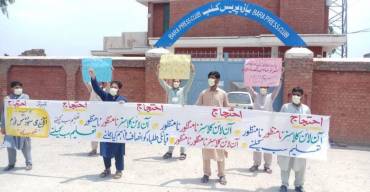 However, the imposition of online classes and online examinations was not well-received. The reason was that in the economic crisis that Pakistan is facing nowadays, not all students have the facilities required.

Hence, this led to an on-and-off debate between HEC and the enrolled students. Of course, seeing this as an opportunity many universities took advantage of the matter also. Protests are being carried out regarding the matter by both the netizens and Twitterati to reimburse the semester fees.

To say that this situation is havoc is an understatement. Albeit, the plot thickened more when a peaceful protest held in Quetta by some university students was disrupted by the Quetta police with heavy lathi charge on both male and female students.

The students were taken to the police station forcefully even though they kept on resisting and asking what they had done wrong.

Isn’t Pakistan a free state? And doesn’t out constitution give us the right to speak our minds or against any form of a wrong done in the society?

The video breaks my heart. It will be remembered in the history that “hum kitab say muhabbat krnay walay hain” was answered with batons and prison vans.
ظلم کے یہ ضابطے ہم نہیں مانتے #ReleaseAllStudents pic.twitter.com/dOhzO3FpNN

Then why is it so that the students were being ambushed and treated poorly in Quetta. This is quite a disappointing aspect and strict action must be taken to condemn it.

Not only is this act condemnable, but it makes us wonder if the year 2020 is a year of distress. Police brutality is becoming a part of the world quite rapidly, just a few weeks back we heard about the 17-year-old football player in Mexico. It seems the police has lost its main value and purpose.

I am arrested along with other Peaceful students .we were protesting against online classes.police has beaten and arrested male and female students.This barbaric state doesn’t changed its behaviour towards oppressed nations .#SayNoToOnlineClasses pic.twitter.com/2VLfcQTG2E

Students are the reflection of tomorrow. Their voice is supposed to be recognized and it is important to make them feel accepted. To see them behind bars without any reason other than a simple and peaceful protest is unacceptable.

However, one aspect, that has to be kept in mind, and can be regarded as a major mistake by the students is, that not all of them followed any SOPs provided that we are living life in a pandemic. Hence, the proper safety kit could have made the case a bit stronger against the police. Now there is a chance, students might be portrayed in negative limelight on this ground. All we can do is hope for the best. And also make sure that police brutality in all forms must be condemned.

Did You Know That 5 Cricketers Actually Changed Their Religion?
40% Pilots In Pakistani Airlines Have Fake Licenses – PIA Says It Will Ground 150 Pilots
To Top