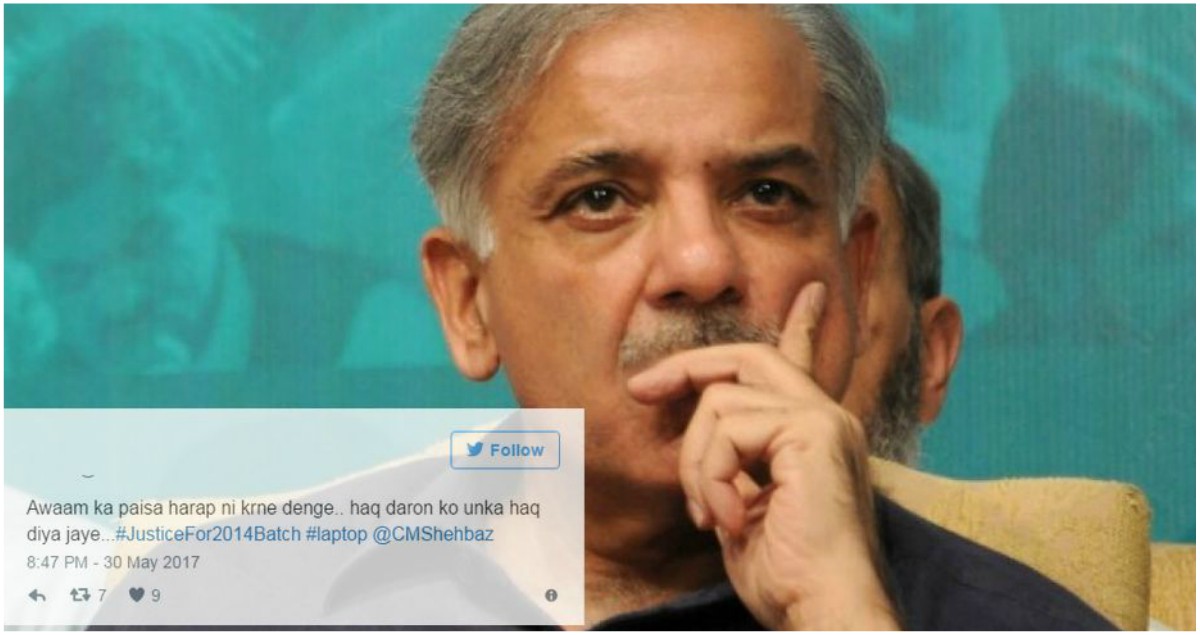 If you have done matriculation with an excellent percentage from Punjab Board in recent years and haven’t received your richly deserved CM scheme laptop, you will truly understand the pain of 2014 Batch.

As per the Chief Minister e-Youth Initiative under Youth Development Program’s overview: “The objective is to provide free laptops to 100 thousand brilliant students currently studying at public sector colleges and universities or are high achievers of the Boards of Punjab in Matriculation Examinations.”

However quite unfortunately, dispersion of these laptops stopped when the turn came for 2014 Batch and allocated money was spent in Orange Line Metro Train.

Now when once again this scheme was rehabilitated and laptops were distributed again, 2014 batch was ignored altogether. After being ignored continuously for 3 years, students from different universities of Punjab have unified their efforts to form a trend on Twitter under the hashtag #JusticeFor2014Batch

Use #Justicefor2014batch and protest for your your right. Why is 2014 batch being ignored in cm laptop scheme?

We equally deserve the laptops like the other hardworking batches have. @CMShehbaz we need our laptops on our merit! #Justicefor2014batch

We want justice @CMShehbaz , we want our laptops. #Justicefor2014batch.

They said they won’t bear this injustice

@CMShehbaz why are not you people giving Laptops to Batch of 14 despite the fact that we qualify for it?#JusticeFor2014Batch #WeNeedJustice

Some thought laptop scheme was only meant to attract voters

Meanwhile, everyone kept looking for CM himself and Maryam Nawaz’s response

@MaryamNSharif Madam! Why students of 2014 being ignored in CM laptop scheme? Its our right☝#Justicefor2014batch

Did we not work hard enough or what?
We want our laptops too.@CMShehbaz @MaryamNSharif #Justicefor2014batch

But no one responded

Bernie was a good man until he met Shahbaz Shareef..
Why us? Why? ?#JusticeFor2014Batch pic.twitter.com/cR7wsviwyL

#JusticeFor2014Batch
When batch 2014 asks for their laptops, @CMShehbaz be like: pic.twitter.com/B3OGcFUWgf

Shahbaz Sharif where is my cm scheme laptop?#Justicefor2014batch

Still, the students are unwilling to give up. They intend to fight for their rights till the time their voice is heard.

Local Sikhs In Peshawar Are Helping Muslims In Ramadan and It’s Beautiful!
Here is Why I am in Favour of The 3-Day Fruit Boycott
To Top