Accidents are surfacing increasingly in times like today. Reckless driving and negligence of traffic rules and regulations are the primary causes of the rapid increase in road accidents. While accidents remain a normal affair in a metropolis like Karachi, the need to educate and grow cautious regarding safety measures is most important. 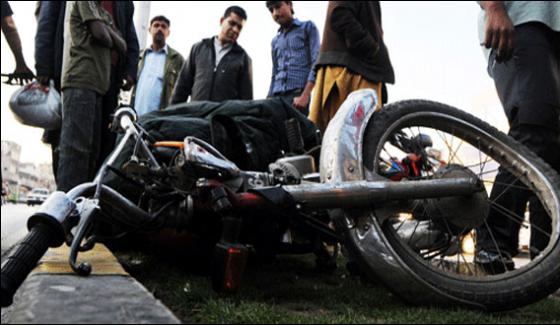 In any unfortunate occurrence, the least one can do is arrange the injured person to a hospital facility as soon as possible. However, with the unfortunate rise in accidents, there is also a maddening rise recorded in “hit and run” incidents each year. Casualties are massive in recent times and it calls for a dire need to observe the traffic rules. Normally, people lure the sight of a long stretch – just imagine, driving on Karachi’s Shahra-e-Faisal without traffic at all, you would never bother slowing down. However, it also can be treated as negligence, one such that can backfire extremely bad. A similar incident took place the other day in Karachi when a person riding on his bike was hit by a car behind.

A strong message to the person who hit, ran and never bothered to look back

We came across a Facebook post where the victim reported his accident and narrated the entire incident. Here is what he wrote:

Yesterday at around 4:10 am I was going home from work on my bike at Shahra-e-Faisal opposite Laal Kothi and a Car with a huge speed hit me from behind and ESCAPED!!

I had taken the U-turn near Habitt which put me in the fast lane directly – that’s where it took place. I was lying in the fast lane with my head all torn and the blood just wouldn’t stop. I kept lying there (unconscious) for a great big hour and some great people stopped by, saw me, went to my office, and told my colleagues there.

One of my colleagues then came to rescue and took me to Jinnah where I got 10+ Stitches on my head, severe extreme severe pain on the right shoulder, lost two teeth and (sustained) scratches all over my face and body. Not sure of any internal injuries as of today, as doctors say my skull might have been damaged, will be going for X-Ray tomorrow.

My bike was punctured and I was at a mere speed of 10 km/hr on Shahra-e-Faisal.

If the person who hit me yesterday is reading this, then know that I’m really not mad because you hit me, but I’m really mad that you just left me to die there in the middle of the night while I was lying unconscious on the FAST LANE?? What if some car would’ve crushed me or something? Please if you are reading this, please do not ever just leave someone to die especially when you are the reason of their condition! 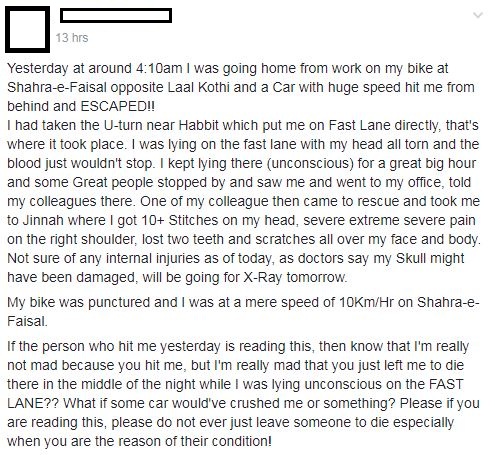 Indeed, it’s appalling how that person left him injured on the main in Karachi road like that. He makes a point regarding being hit and run over by other vehicles which are valid on all grounds. We need to grow a sense of responsibility and compassion for others. We intend to grow awareness among people so that they can learn what kind of damage could be averted.