While our country talks about progression both in terms of science and religious understandings, their lies an ever-growing sentiment in those who think they are better than everyone else.

Often we come across such situations where people are schooled by some so-called caretakers in Islam who don’t even understand what truly, Islam is all about.

Similarly, we have come across another such incident where a young couple in all their happiness shared a simple picture of themselves on Facebook.

Sliding into DMs for religious policing

A husband posted a picture with his wife in their living room, the man is wearing a simple shalwar kameez with waistcoat his wife has a hijab on with only her eyes visible.

You’d think what’s so special about this?

Apparently, some thought to school the husband about how his wife is showing ‘her eyebrow’ and how ‘haram’ that is.

Jazib Kaleem a resident of Canada, took to social media to share an absurd conversation he had with a stranger who schooled him on letting his wife show her eyebrows to ‘namehram’. 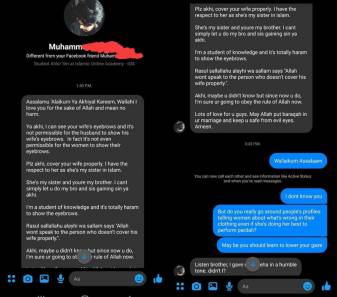 How a stranger slides into anyone’s DMs to tell that your wife’s eyebrows are showing when according to the same religion’s practices one is to lower their gaze if any such thing occurs is truly beyond sanity.

‘Your wife’s eyebrows are showing its haram!’

A bewildered Jazib first tried to make sense of the unnecessary intrusion in his personal life and tried to have a rational conversation with the uninvited fellow.

“Do you really go around people’s profiles telling women about what’s wrong in their clothing even if she’s doing her best to observe purdah?”

“Maybe you should learn to lower your gaze,” Jazib wrote.

Jazib was then quick to realize that this was one of those situations were reason and logic are thrown out of the window when the guy wrote, “You are being a jerk, you don’t know how to talk to a Muslim brother.” 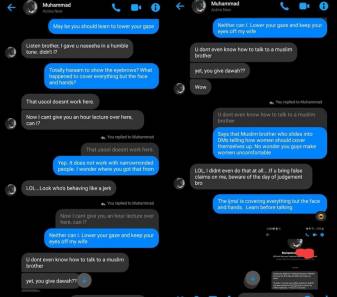 The religious policing was taken to an extra level when the guy blamed Jazib for not covering his wife properly. 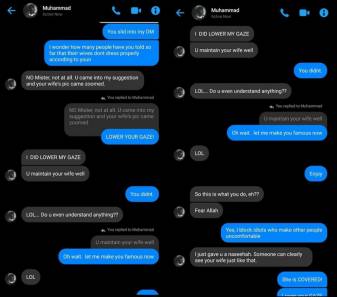 Jazib unable to talk any sense into the guy asked him to lower his gaze and tried to step away from the nonsensical conversation. But apparently the guy was adamant to come off as the high and mighty!

“I gave you a humble naseeha (suggestion) didn’t I? If you put any false claims on me, beware of the day of judgment bro! You maintain your wife!”

Jazib done with the conversation by the time told the user that he is reporting & blocking him and that he should learn a thing or 2 about religion first.

To which the guy replied, ” If you do anything bad to me I will grab your throat on the day of judgment!” 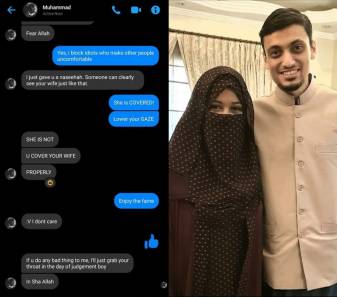 Such baffling conversations draw our minds towards a deeper issue. What is really being taught to these people? What made them believe it is okay to school anyone they wish. Do they think people’s privacy is up for invasion as long as they believe they are doing ‘good’?

Lastly, who made them in charge of such brazen intrusion of anyone’s personal life? There needs to be a line drawn where this so-called religious policing needs to stop.

How are we going to keep such brazen intrusion at bay to keep our sanity and privacy intact?