Cricket South Africa decides to postpone the trip to Pakistan due to the overload their cricketers are facing. CSA said that after continuous series, their team needs a break and PCB accepted the decision with an open heart. 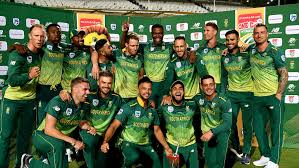 South Africa is still to come!

After PCB’s chairman had decided to give the Rawalpindi stadium a chance for South Africa and Pakistan to go toe to toe with each other, the decision seems to be reversed.

CSA announced that their team is right now overwhelmed by the experience received in Australia and now deserves a rest. Since the team has been playing back to back series from England to Australia.

The Proteas are expected to announce the date soon, as their players are ready to get back on the field. Cricket enthusiasts like me were already rooting for international teams to perform in Pakistan after Sri Lanka.

However, Pakistan’s Cricket Board Chairman stated:

The renovation was at it’s best at the Rawalpindi stadium as our Chairman of PCB was keenly looking forward to it.

The board was ready to receive their guests and the fans had already gone crazy. Sad news for the fans that they will not be able to see more action after PSL 2020.

Pakistan still has a long way to go

Nonetheless, the date is said to be rescheduled soon and fans will be delighted by the news. The new date for the tour will soon be announced after mutual consensus between the two boards.

Furthermore, CSA was to send a security delegation to Pakistan to examine all the arrangements to ensure the safety of the team. Being a peace-loving country, Pakistan was open to all sorts of examinations.

Indeed we all should respect the decision, which shows how much care their board has for their own cricketers. On the other hand, we start disrespecting our players when they lose consistency. We should support our players and keep their morals high.

Pakistan’s cricket team is one of the best teams in the world, has a long way to go and there’s a lot of entertaining cricket we are yet to witness. Let’s hope that things work out for them and they soon reschedule their tour to our beloved country.

In spite of the facts, both the boards had agreed to a T20 series which comprised of 3 matches. This series was to be brought into action right after the end of PSL 2020 (the event we all are looking forward to).

However, we still wish the best to both teams for their endeavours and pray that South Africa does it’s best.