Exploring Africa has been on our mind for some time because it is not a well-traveled region like Europe or Asia, and so little is known about many of the countries within the continent. Our travel began from Cape Town in South Africa and gradually worked our way up through Zambia, Malawi, Tanzania, Jordan, Israel, Egypt, Kenya, Tunisia, Morocco to Gibraltar.

Travelling through South Africa was an interesting experience. In many ways it was educational as well as illuminating. The practice of apartheid system and discriminatory laws in South Africa were well known for a long time. Soweto Township, a symbol of apartheid, was known the world over. Its immensity does not sink in until one comes face to face with the realities of day to day life. On the other hand, South Africa with all its blemishes had been a shining star in the so-called dark continent of Africa of yester years. No doubt the country had to pass through, extremely turbulent periods in its historical past under colonial rule. The Portuguese explorer Bartholomew Dia was the first European sailor to reach South Africa in March 1488. He was followed by Vasco da Gama who eventually sailed to India in 1498 going around the Cape of Good Hope (Fig 1). The Dutch first settled in Cape Town in 1652 and established a resupply base for the sailors to India and the Far East. The territory was ceded to the British in 1814. It remained British Colony until it became independent Union of South Africa which comprised of four provinces Transvaal Colony, Natal Colony, Cape Colony and the Orange River Colony.  It was granted a Dominion Status under British Empire .in 1910. In 1961, it became a sovereign Republic known as Republic of South Africa.

Both the Dutch and the British practiced colonial rules of governance where majority of the population was denied its basic human rights, and racial discrimination received official sanction. The Blacks constituting about two third of the population were granted about 7.5 % of the land where they could own a piece of property, while the Whites had the rest of the country to themselves. The Black Africans could live outside of their territory only if employed by Whites. The Black Africans had to carry a Passbook with them all the time to show their identity.

The story is well known that Mohandas Gandhi (Fig 2), a trained lawyer with a valid First Class train ticket travelling from Durban, was thrown out of the train because he was not a White person, and therefore, not allowed to travel in the same compartment as Whites. He experienced the first taste of indignity which traumatized him to his core. He was the first lawyer of Indian descent in South Africa, but he realized, to quote his own words, that ‘I was an insignificant Coolie lawyer; I was first in the field, nevertheless a Coolie’. He started an anti-discriminatory movement which became popularly known as ‘Satyagraha’ movement- a passive resistance movement.  He became the leading voice for South Africa’s Indian community. A modest thatched roof house which Gandhi shared with his friend Hermann Kallenbach of German ancestry can still be seen in Johannesburg (Fig 3). Gandhi lived in this house till 1909. It has been declared as National Heritage. After having lived in South Africa for 27 years, Gandhi left for India in 1914 where he championed the cause of freedom movement using his philosophy of nonviolence and passive resistance – Satyagraha and Ahimsa. He finally helped win the freedom from the British colonial rule in India in 1947.

The struggle of Nelson Mandela (Fig.4) against apartheid and White supremacy in South Africa is well known. He spent a total of 27 years in jail, much of it in Robben Island offshore Cape Town. He spent much of his time in Cell #4 (Fig. 5) in solitary confinement as an ordinary prisoner. This cell was not marked as having been occupied by the great political activist probably at his request. He thought he was in the cell as an ordinary prisoner like many others in adjacent cells. Therefore, there was no need to recognize his cell in any particular manner. This was his greatness! Nelson Mandela was democratically elected as the first black president in 1994 and served until 1999. We also visited the Church where Desmond Tutu preached and the house where he lived. It was interesting to note that both the Noble Laureates Nelson Mandela and Desmond Tutu lived on the same street.

As a part of our sojourn, we visited District Six Museum in Cape Town, where I picked up a book called “Noor’s Story- My life in District Six’ out of curiosity. An elderly gentleman briskly came forward and introduced himself saying that he was the author of the book. I was overwhelmed at the thought that I was sharing the difficult memories of segregation symbolized by District Six with a person who had lived it. He was kind enough to autograph the book for us as well as have a picture taken (Fig.6). District Six, as it was called, was a suburban neighbor hood in Capetown. In 1966, this was declared an area for White People. The residents of the area were given a notice to vacate the neighborhood, and after several years of waiting the day of reckoning finally arrived. All the houses were bulldozed one by one and street signs taken out making way for the white folks. It was a touching story.

We visited Soweto – (SOuth WEst TOwnships), an ignominious symbol of apartheid in the history of South Africa. It was a township created for the black people in order to segregate them from the white community. Soweto uprising – a game-changing event – erupted to protest the government policy of implementing the medium of education in Afrikan rather than in their ethnic language.  Several thousand people marched in a procession followed by police firing and brutalities. Many people died including one minor Hector Peterson. Someone from the crowd lifted the dead body of Hector Peterson and carried him through the procession. Instantaneously, he became the symbol of resistance to the white supremacy. (Fig 7). This reverberated across the world resulting in condemnations of global community and sanctions of various sorts.

We also visited some of the less fortunate neighborhoods. The impoverishment and deprivation of this segment of the society was emotionally very unsettling. This led us to visit a kindergarten-primary school in the same neighborhood (Fig 8). There were no desks, no chairs and no colored posters to brighten the room.  But the teachers and the kids had a smile on their face, and apparently were full of optimism and focused on bright future ahead. The bright side of the story was that the government was fully aware of the desperate plight of the people. The government has constructed a large number of low cost housing and assigned to the people living in the so-called slum areas. This process is ongoing and hopefully one day all the people living in slums will be relocated.

The flame of democracy (Fig 9) conceived by Gandhi, and ignited by Mandela in South Africa has endured. In the neighboring country Zambia, statue of the first democratically elected president Kenneth David Kaunda (Fig 10), clad in a Gandhi style outfit could be seen in a compound where his modest house still stands .in Lusaka, Zambia. A trip to Livingston to see the famous Victoria Falls was planned. The Falls did not have the same glamour as it normally does because of severe drought conditions in the hinterland which feeds water into the Fall. Zambia gained independence in October 1964.

Our journey continued into Malawi. Zomba Plateau, Malawi Lake in Selima, city of Blantyre, a commercial hub, and Four Seasons Garden in Lilongwe, were great attractions in Malawi. Unfortunately, we could not take a boat ride in the lake, but we had a chance to taste a delicious Chombo fish caught from the fresh water Malawi Lake. Zomba potato, Mexican apple, locally called Masuku, were worth trying.

Fig. 1 Cape of Good, the most South Western Point in South Africa 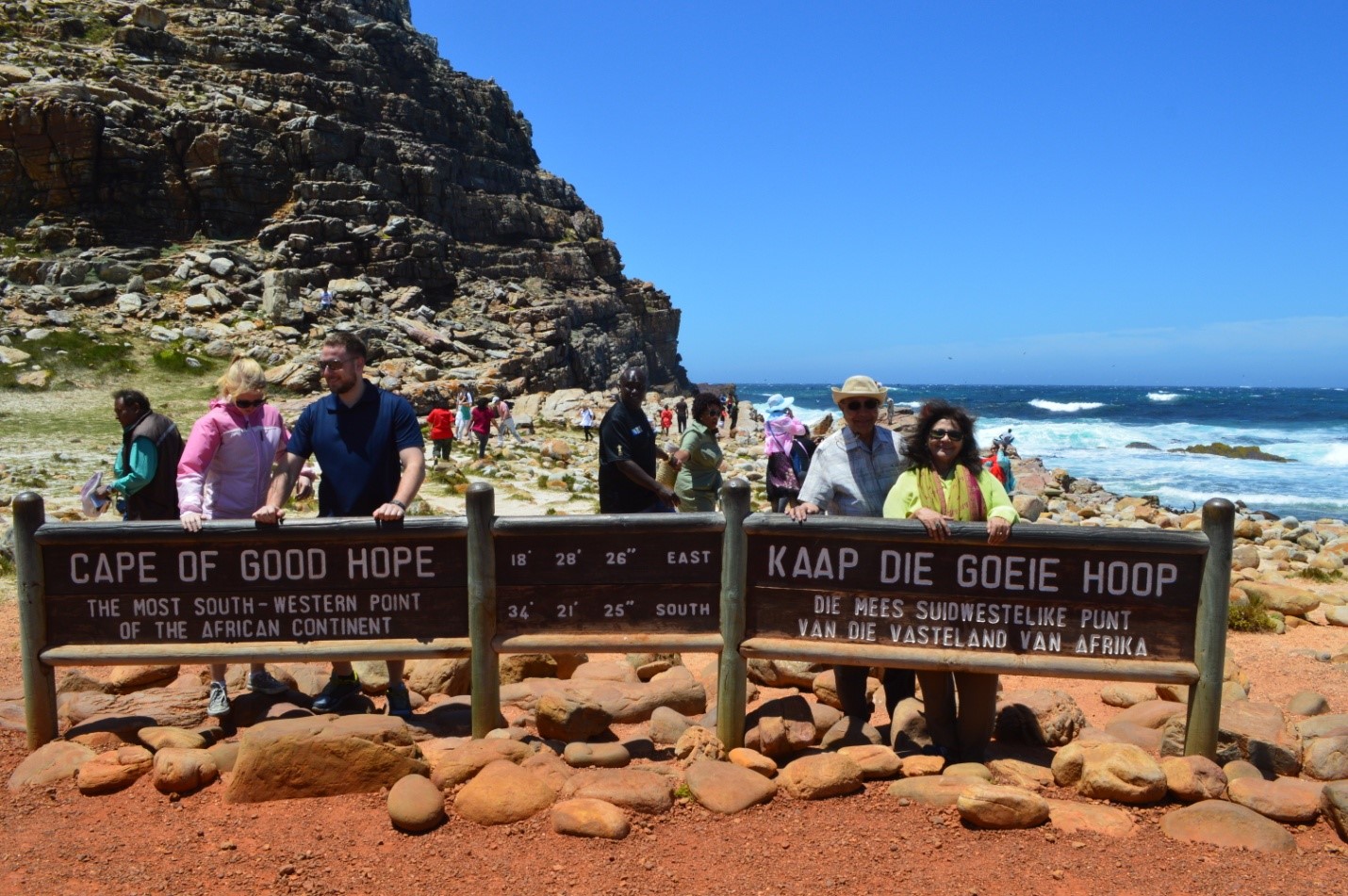 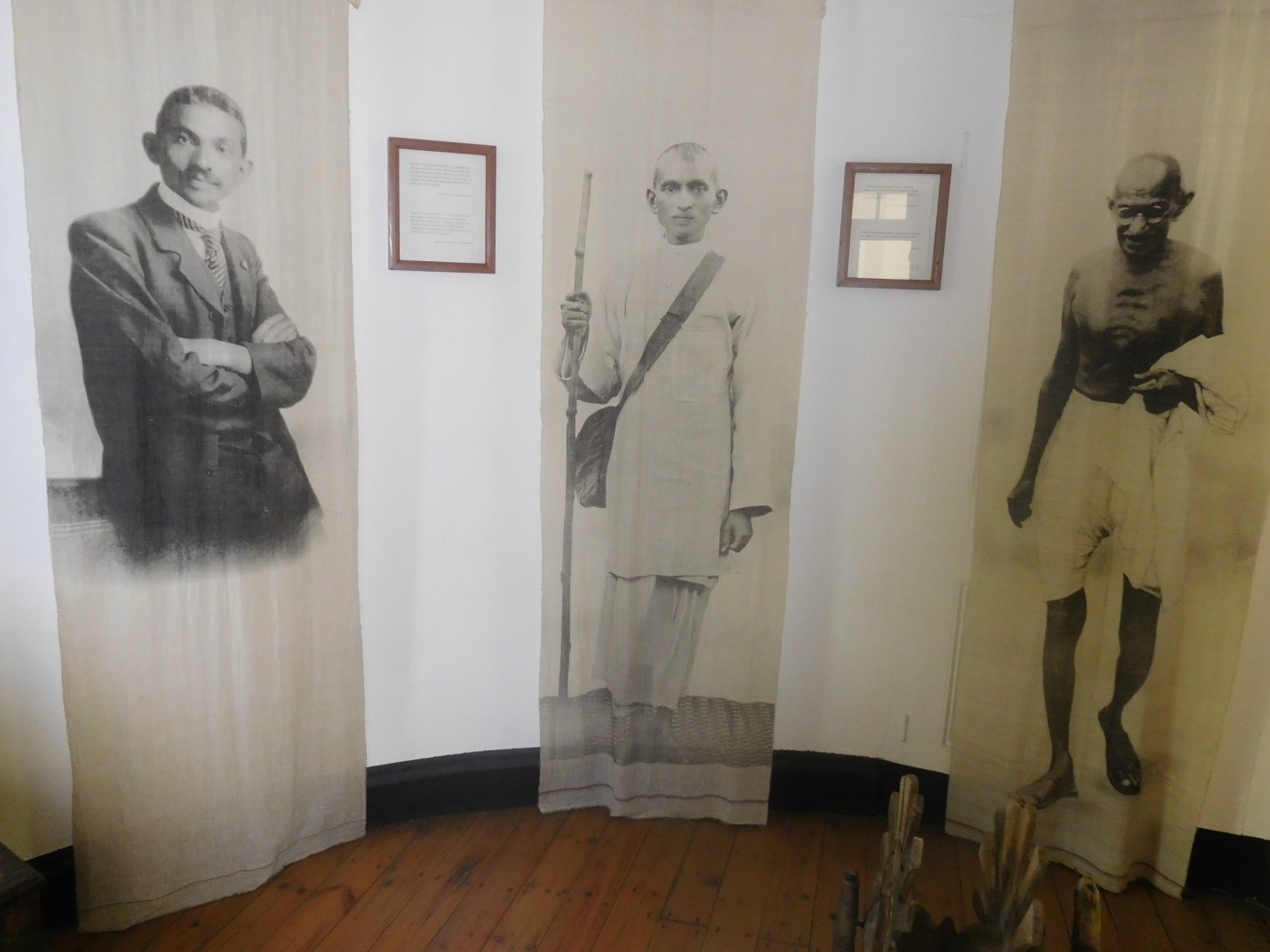 Fig. 3.  Mr. M.K. Gandhi lived in this house with his friend Mr. Hermann Kallenbach in Johannesburg for several years. This has been declared as National Heritage 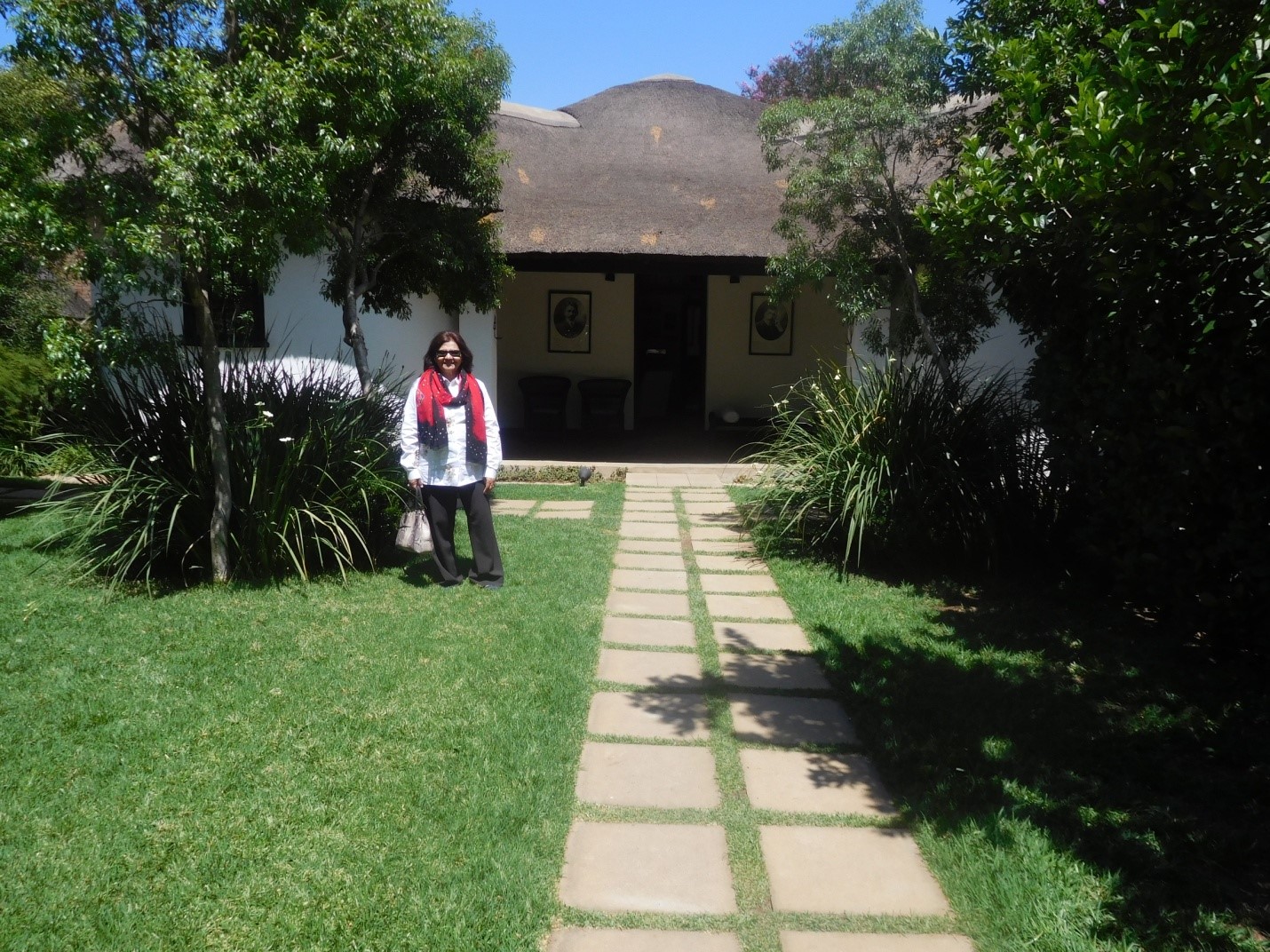 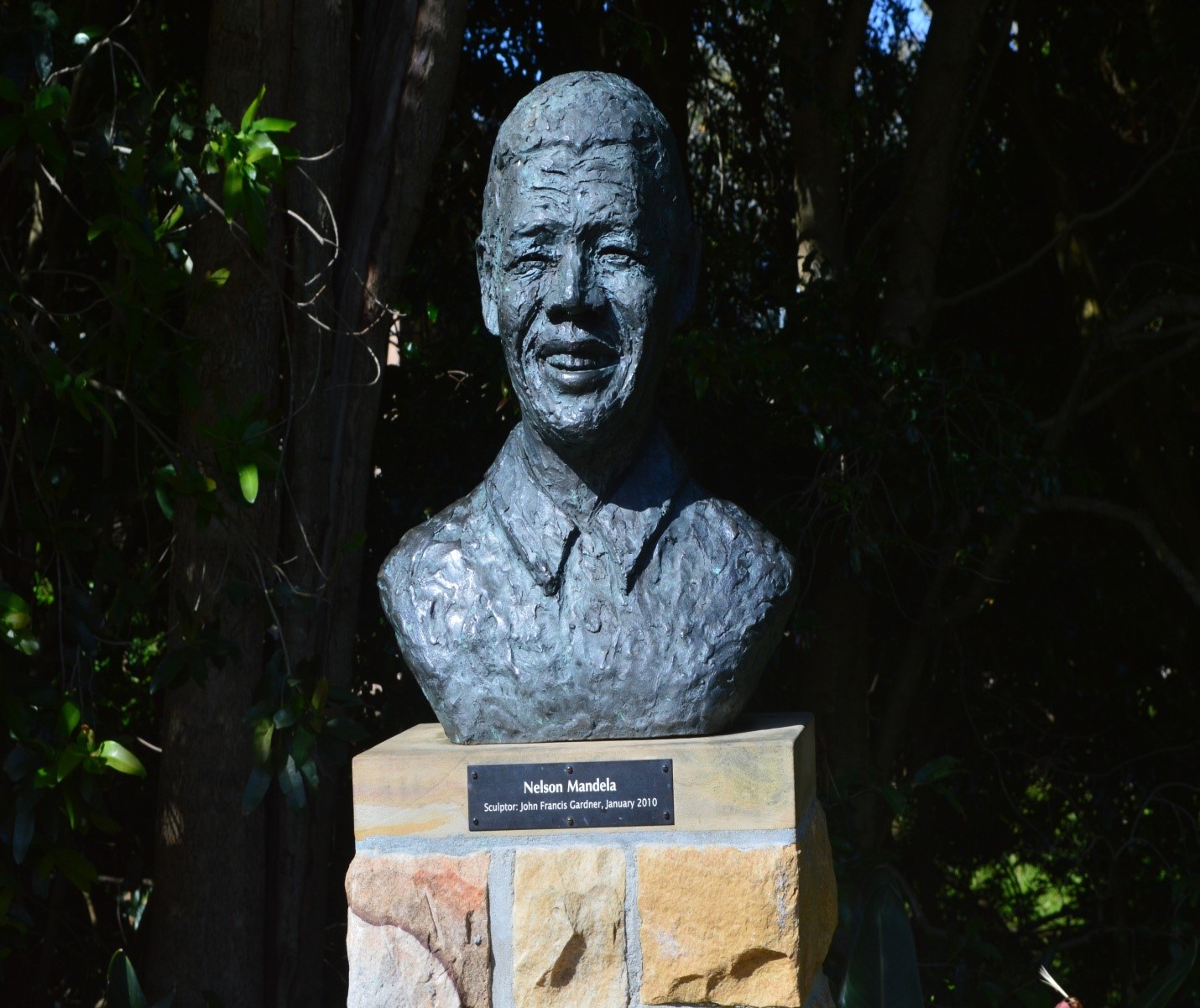 Fig 5. Prision Cells on both sides of the aisle on Robben Island, the maximum security Prision  Nelson mandela was held in Cell # 4, South Africa 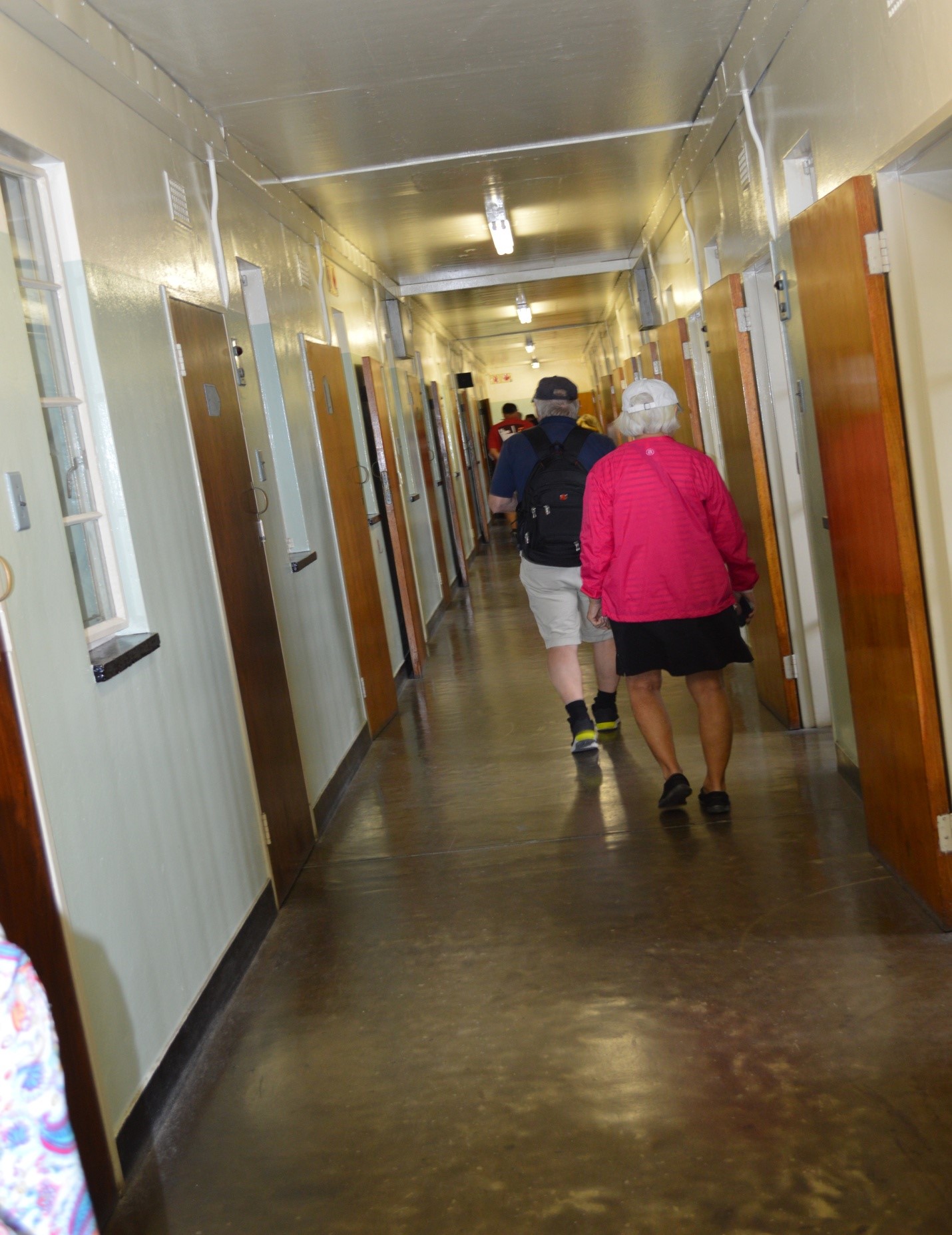 Fig. 6 The author on the left holding a copy of his book ‘Noor’s Story- My life in District Six’ ,South Africa 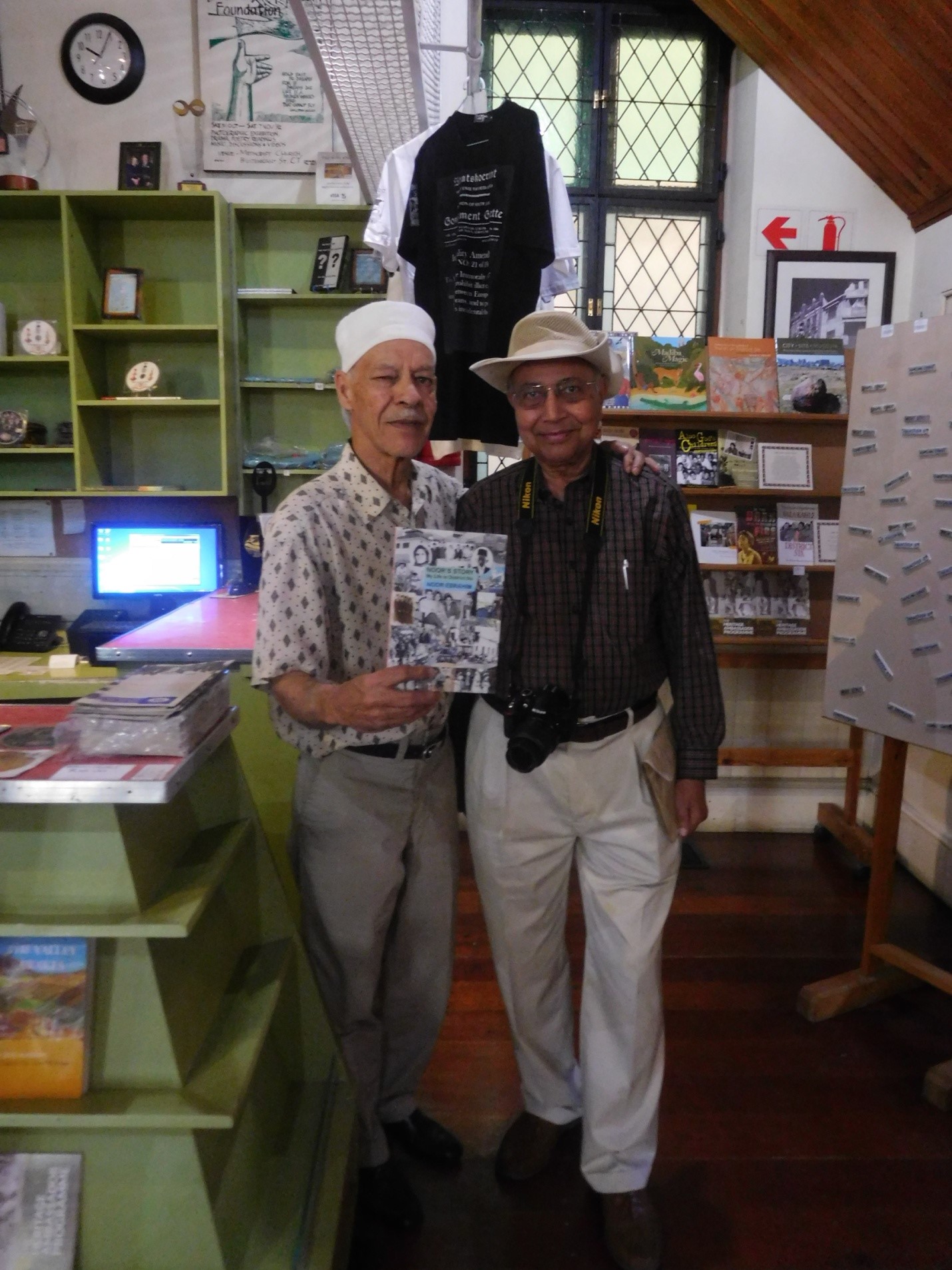 Fig. 7. Hector Peterson Memorial. In the photograph, the wounded Hector Peterson is being carried in the demonstrating crowd. His sister is seen following them., South Africa. 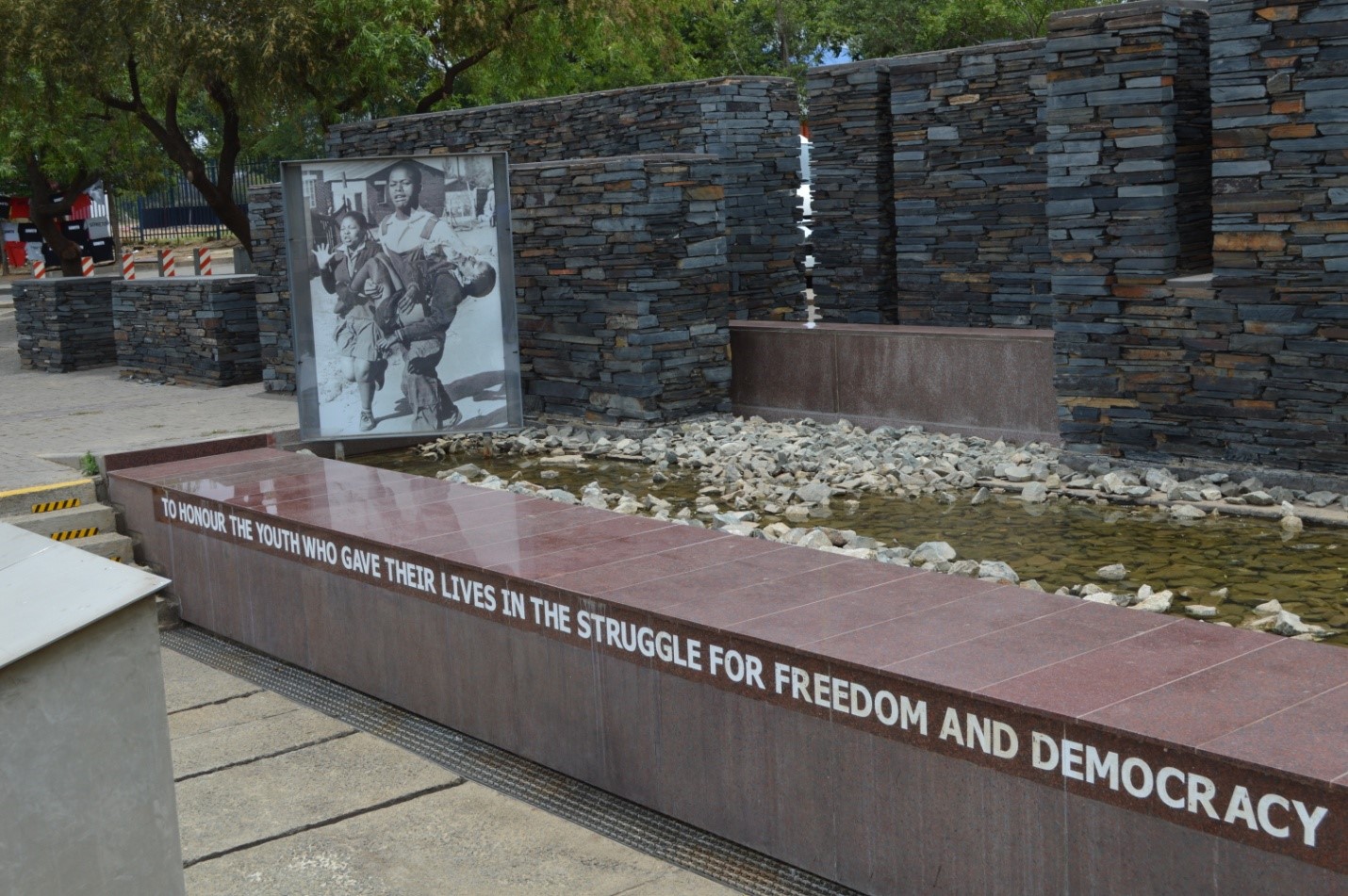 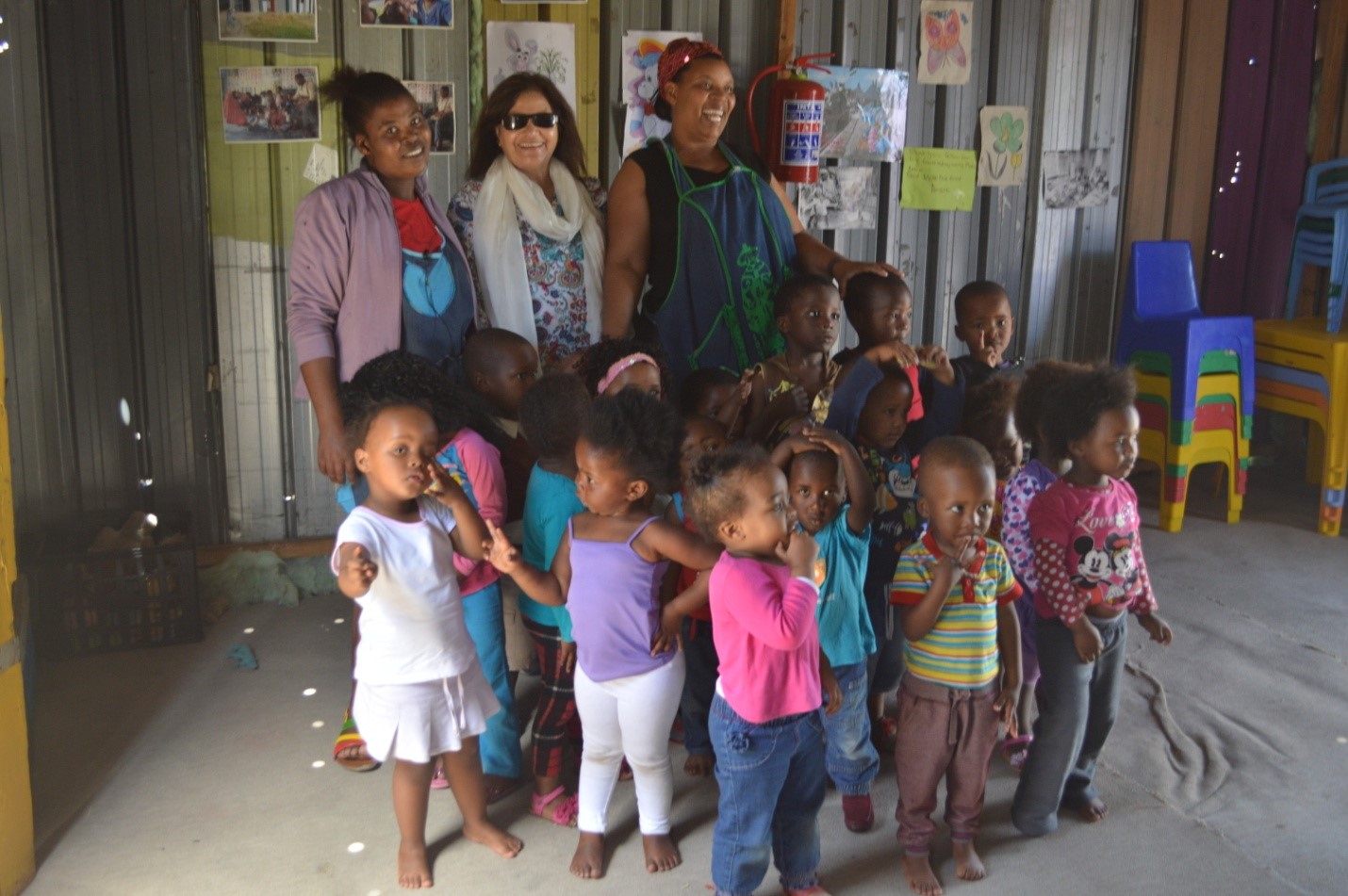 Fig.9. The eternal Flame of Democracy at the Constitution Hill in Johannesburg, South Africa. 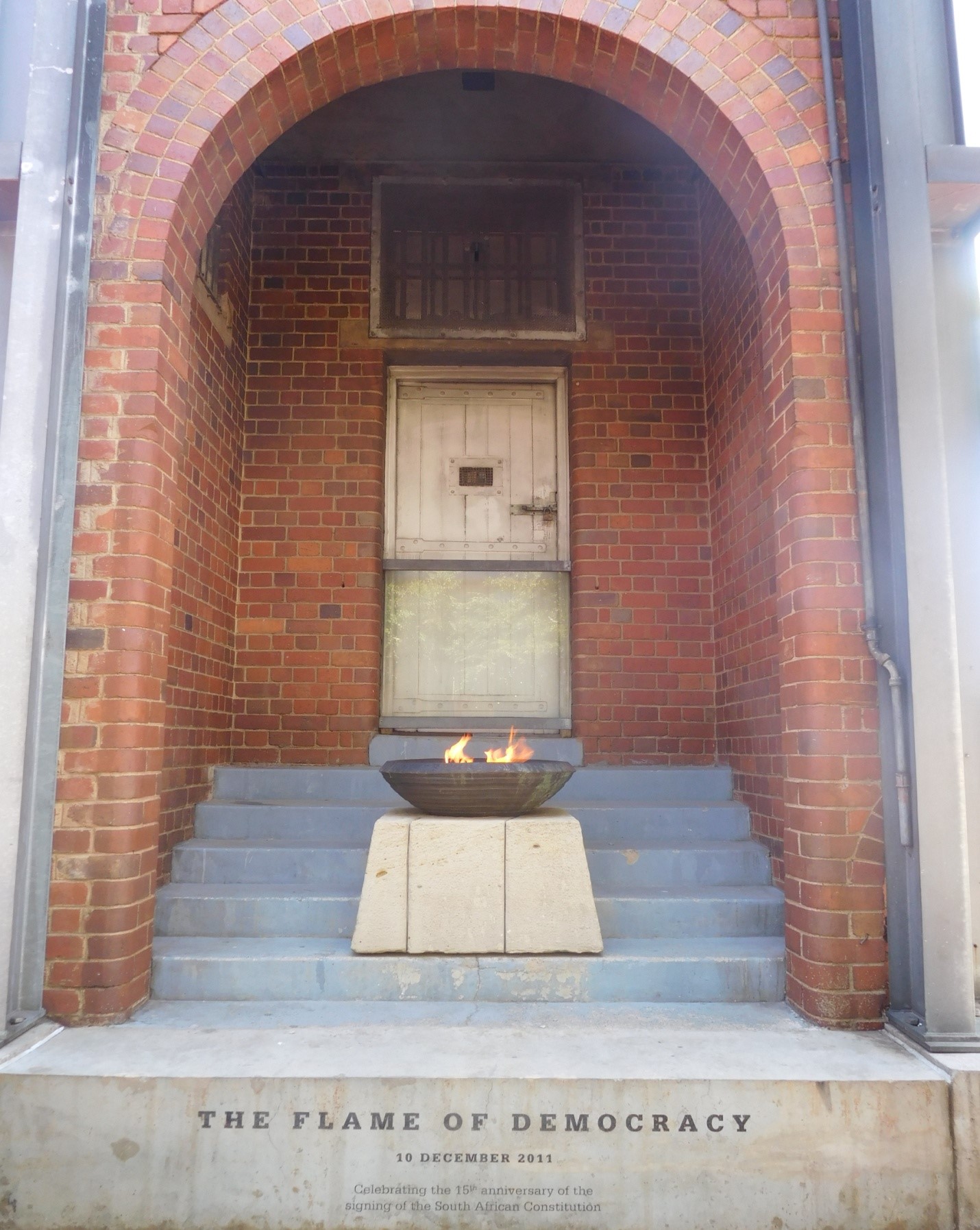 (Fig. 10) The statue of Kenneth Kaunda clad in a Gandhi style robe with his house in the background.  He directed his operations from this house leading to independence in October 1964. 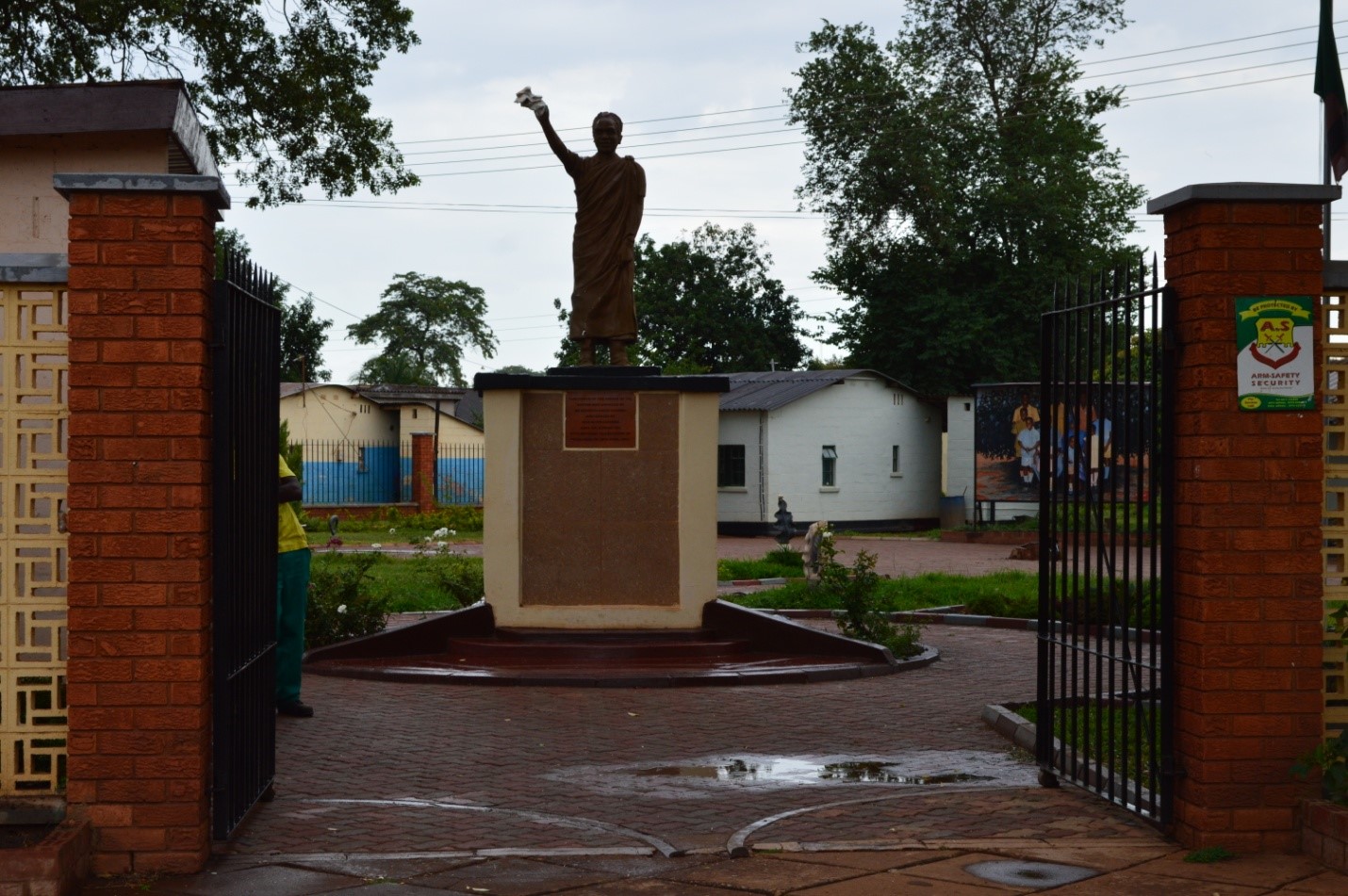