Imagine being one of the most prominent figures in Pakistani politics — three-time prime minister and leader of the incumbent government of Pakistan; how would you want your legacy? What manner would you want the historians to write your name down as? Realistically and probably, something good and concrete, for sure.

Now imagine stepping into Nawaz Sharif’s shoes, who is fit for the description above, minus the latter portion. The former prime minister of Pakistan, Mian Muhammad Nawaz Sharif is now being disgraced beyond any moral or integral repair. Somebody just tried selling him on eBay and the result is absolutely hilarious!

There have been 100 bids on the ad and the amount has crossed a mammoth 66,200 Euros, which converts to almost 83 lakh rupees in Pakistan. 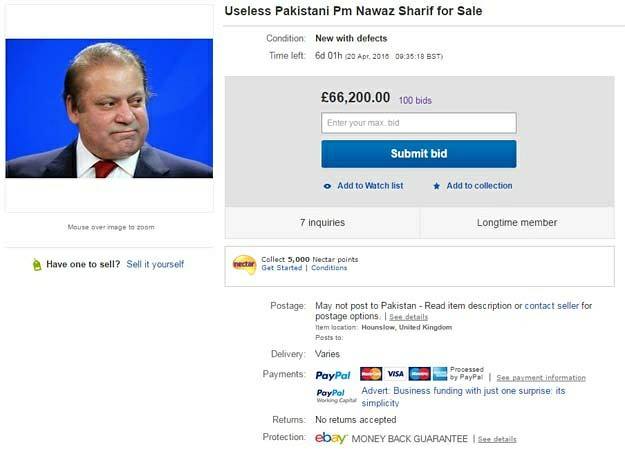 Apart from the ad itself, the comments under a social media page regarding the sale of Mian Muhammad Nawaz Sharif will leave you in fits. Even though the ad looks old, a long time before the PM was actually disqualified, but the recent remarks sit absolutely perfectly with the current scenario.

This is not the first time a Pakistani has been put up for sale on eBay — previously, one of the stars of the national team, fast bowler Wahab Riaz had also found space on the website after the people were ‘literally done‘ with him.

Wahab Riaz was put up for sale on eBay for a meager 1 Australian Dollar. At least the ‘useless’ ex-PM of Pakistan has attracted a huge amount of money. To be very fair, buying Nawaz Sharif for 83 lakh rupees is an absolute bargain — why? Because with him come billions of rupees which may belong to him or the people of Pakistan (depending on how you take the Supreme Court’s disqualification).

Pakistan’s witty side never fails to amaze us. From selling our national heroes, politicians, and whatnot on the internet to sitting in front of container cordoned dharnas on D-Chowk — we are a fearless nation who can do absolutely everything and anything!

A Doctor From Switzerland Visited Pakistan And Labeled It As The BEST Trip Of Her Life!
An Open Letter To The Boy Who Scored 66 As: Don’t Set the Wrong Example
To Top