Pakistan’s Foreign Minister Shah Mahmood Qureshi was recorded taking ba’it (private tax) from his destitute in Multan. The people who voted for him are now being robbed by him. Is this a new low that Pakistani politicians have hit? 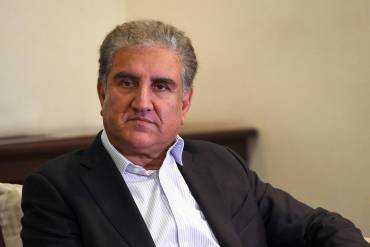 The viral video of Pakistan’s Foreign Minister in Multan shows him cutting the hair of girls and women. He cuts hair to take allegiance from women and in return gets the money. Not only is he getting money offerings, but is also being offered with gold.

SMQ a foreign minister or a Pir Baba?

Shah Mahmood’s video portrays the ugly side of him exploiting religion. Under the banner of religion, he is found to be masquerading as a Pir Baba. The Pakistan Foreign Minister has been running a Pir Muridi system in Multan for decades.

He is found to be taking an oath of allegiance from the people of Multan (called Bai’at) where allegiance is sworn at the hands of him (as a Pir). This act is carried out as repentance of previous sins. Once this is done, the person who takes the oath is called a Murid.

On the occasion of Urs, Shah Mahmood has been found to be taking allegiance from young girls and women to join the party. The video is going viral on social media at the moment and has shocked everyone to the core.

According to a few sources, additionally, Shah Mahmood Qureshi not only cuts the hair of women but is also seen to be taking all kinds of necessities from them. Be it gold, silver, or cash, he takes all kinds of offerings from his followers.

The video symbolizes the transformation of the party that claims heredity and abolition of human slavery. Its very own leader has been found to be collecting money by enslaving people in the name of religion.

This is how people are reacting to the video.

Just watch, the way they treat human beings like their slaves. It’s people’s fault. Need to wake up. Do not expect any kind of justice from these people etc. #ShahMehmoodQureshi @ImranKhanPTI pic.twitter.com/8J9wd6mGDg

He is our FM. Imagine how he would laugh over these theatrics while he is with family or all alone. Poor murids.pic.twitter.com/sd0PUc887X

Pakistan’s Foreign Minister pretending to be a Pir and deceiving people for his fraudulent gain is highly problematic. This is not the first time that religion is being used for personal gains. Especially for political gain, using religion is nothing new.

People are seen bowing their heads to receive prayers from him. Is this what the Pakistani politicians will be doing now? Fooling the poor and destitute is nothing new. Furthermore, they have always been manipulated under the guise of religion. This was not at all expected from the well-educated leaders of our country.

Manipulating the uneducated and unfortunate people is simply unacceptable! Don’t these politicians already earn enough to live a luxurious life? Was this part-time job as a barber and a Pir Baba really necessary? Is this the new low that our politicians will be stooping to?

However, the subject-matter has caused an uproar on social media. People are deploring this bigotry, manipulative and exploitative act of the current Minister of Foreign Affairs. Previously SMQ was under fire for holding an extravagant wedding for his son.