Pakistani singer Rabi Pirzada is under fire for keeping exotic animals like snakes, crocodiles, and other such reptiles as pets in her beauty salon in Lahore.

The Punjab Wildlife Protection and Parks Department noticed her posts where she displays the animals, and it seems they are taking serious action against her. They have submitted a challan against her in a court.

Sohail Ashraf, Punjab Wildlife Protection and Parks Director General Lieutenant, Deputy Director Lahore Region and District Wildlife Officer Lahore Tanvir Ahmed Janjua, and other of the department’s members have come together to legally tackle the actress. Moreover, under the Punjab Wildlife (Protection, Conservation and Management) Act of 1974, keeping exotic animals is illegal and can result in an imprisonment of two to three years. 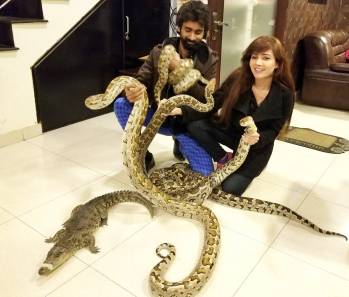 This is what Rabi Pirzada has to say regarding her pets, “I have loved snakes ever since I was young, even though my parents were not in favor of this. They used to try and stop me but I patiently waited till a time I could afford the hobby myself,”

To be fair, it is also unethical to keep wild animals as pets or indoors because they are not built for living with humans. It is physically and mentally damaging for such animals to live anywhere outside of their natural habitat. And considering that we live in a Muslim country, we should understand the importance of ensuring care for animals. It is also sad to witness that the trend of keeping exotic animals is increasing by the day, especially among rich people.

The reptiles that she is showing off as pets need to stay within the boundaries of the wild life as naturally that is the most suitable for them. Not to mention, such animals are also dangerous because they are not originally inclined towards domestication, and can hurt or even kill the owner. 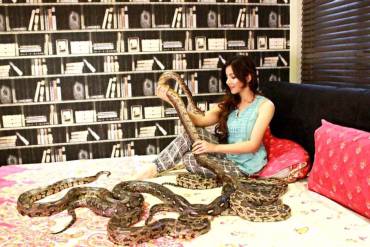 There have been various cases where the owners were mauled by the exotic animals that they confined in their homes. Though, some believe that if one takes proper care of such animals then they can easily co-exist with humans as well.  Regardless, the decision by the wildlife protections services seems to be a bit shady according to the singer.

Rabi Pirzada believes that there is another underlying motive for suddenly taking action on her. She mentions that she has made several videos of her pets and uploaded on social media for about five years now. But just as she called out India’s Prime Minister Modi in one of her videos, the legal authorities suddenly took notice.

A couple of days before she uploaded a video that immediately went viral where she threatened Modi because of his current decisions towards Kashmir. In the video her pet snakes are roaming around the room while she mentions that her ‘friends’ and herself will fight for Kashmir.

There is a possibility that her claims could be true, but there is also a chance that the viral nature of the post helped the wildlife department in identifying her. And they weren’t able to do so before because her videos had not reached them yet. However, it is still unclear whether her video on Modi has connections with the sudden legal action against her.

What do you think of the situation? Do you think that Rabi Pirzada is right on her claim that the authorities took action because of a biased reason? Do you agree with the decision to confiscate her animals? Share your thoughts using the links below.

Indians Are Claiming That Cow Dung Can Prevent Nuclear Radiations And Ew, Someone Stop Them!
Laal Kabootar Selected As An Official Entry For The Oscars To Represent Pakistan
To Top