WATCH: Power Struggle Between Police And Rangers Over Petty Issue

Currently, under an extended lockdown, Sindh is filled with a large number of police and rangers officials to maintain the writ of the government. However, several videos and images of civilians in the province, violating the implemented safety protocol, continue to surface on social media.

Undoubtedly, the police force in Sindh is working with full zeal and is even catching those who are making money from misery. Previously, Karachi police had caught a man who was selling fake coronavirus vaccines to people without any guilt or shame.

Speaking of the deployed security officials, recently, a clip of an on-duty police officer in Sindh being maltreated by a rangers official is circulating on the internet.

The clash between police and rangers official during the lockdown

Certainly, such derogatory behavior of the security officials towards each other in such crucial times needs to be looked into. As per details, the video is allegedly posted by the police officer himself to show the treatment of rangers against the force. Requesting support, the police officer wants his voice to be heard by the government authorities.

With the name Mamoon on Twitter, the police officer wrote, ”I’m an officer of the Sindh police and I want to tell that rangers have made our lives (police officers) miserable. Their (rangers) treatment towards us is extremely harsh. When we (police officers) complain about them, the senior authorities, instead of taking action against them (rangers), yell at us.”

”It’s my (police officer) humble appeal to all friends to make this video reach Sindh Chief Minister (Murad Ali Shah). We (police officers) can’t be a slave to them (rangers)”, he further added.

It is indeed a shocking revelation by a service policeman and action should be taken if the allegations leveled in the video are true.

Arrests of doctors in Quetta

Earlier, police in Quetta was under fire after the local doctors came out in protest demanding proper gears. However, things went worse when the police force arrested 150 protesting doctors. Fortunately, taking immediate action, the army chief ordered the dispatch of medical equipment to Quetta doctors to resolve the matter. 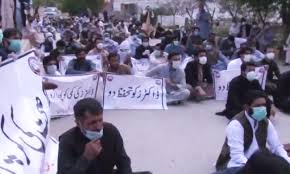 Currently, security officials, doctors, and health workers are fighting coronavirus on the frontlines. They are the ones, who cannot afford to lose track of what they are doing. The battle against coronavirus is far from over yet.