At least 20 people have been killed in a crash between a coaster and a train near Sheikhupura on Friday, said Radio Pakistan. The deceased were Sikh yatrees who were traveling home from Nankana Sahib. Five others were injured. 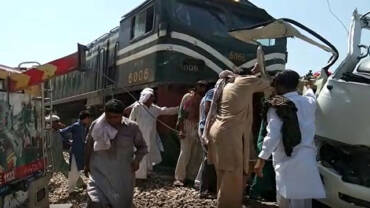 According to police, the dead, which include two children, were all residents of Peshawar.

The accident occurred at an unmanned Railway crossing close to the city of Sheikhupura. The 19 killed were all passengers seated in the coaster. They were traveling from the town of Nankana Sahib to Farooqabad – both sites revered by followers of Sikhism.

Prime Minister Imran Khan also took notice of the accident and offered condolences to the victims’ families. He directed to provide the best possible medical treatment to those injured in the accident.

My condolences and prayers go to the families of the deceased. Have directed relevant authorities to ensure facilitation and care for all the families. Our entire railway's operational safety SOPs will be reviewed immediately.

President Dr. Arif Alvi also expressed deep grief and sorrow over the loss of precious lives in the train accident in Sheikhupura. In a statement, he directed to provide best medical facilities to injured persons of the accident.

Last year, a fire in a train compartment killed more than 70 passengers. Twenty people had died in the Sukkur train accident earlier in 2020.