The former Prime Minister of Pakistan, Mian Nawaz Sharif’s health condition is critical. It is a nationwide known fact that Nawaz Sharif might not have long to live. Now, Maryam Nawaz is feeling the burden too.

The other day, doctors recorded that Nawaz Sharif’s blood platelets had decreased. Marginally low of what healthy would be. The Ex-PM of Pakistan suffers his fate over charges of corruption and embezzlement of public funds.

Nawaz Sharif’s deteriorating health conditions have sparked an outcry on the internet by his supporters and well-wishers. Twitter trends constantly show support for Nawaz Sharif. People have been urging the UN and Amnesty International to ‘save’ Nawaz from the government. 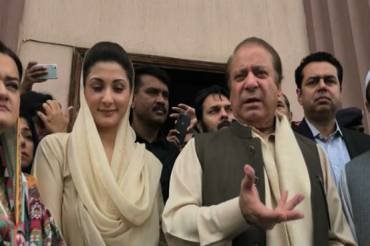 However, in the early hours of Friday, Maryam Nawaz was allowed to meet her ailing father. The decision as suggested by journalist Asma Shirazi came from PM Imran Khan.

Along with Maryam Nawaz, other PML-N leadership also met Nawaz Sharif at the Services Hospital, Lahore. Moreover, this panic has been spread by rumors of news that Nawaz Sharif had already left for his humble abode.

At that time, Maryam Nawaz was also admitted to the hospital, for increased blood pressure and heart palpitation. However, she was ‘discharged’ in the early hours of Friday. The PML-N leadership has been complaining since then.

Moreover, Maryam Aurangzaib is tweeting on the issue, saying that Maryam Nawaz was discharged without reason. She says the PML-N stalwart was ‘not well’ when she was sent back to jail.

This crackdown against PML-N leaders comes in the wake of their expulsion over Al-Azizia and Chaudhry Sugar Mills cases. The whole opposition stands united against the PTI government’s ‘accountability’ drive.

Furthermore, police officials were directed by the government to take Maryam Nawaz back to jail at ‘any cost’. With JUI-F’s ‘Azaadi March’ just around the corner, the stage is set for a rumble at D-Chowk come October 27.

Is this the PML-N’s end?

With Shahbaz Sharif’s hands tied, Maryam and Nawaz Sharif jailed, is this the PML-N’s end? Apart from the Sharif family, no other party member seems strong enough to challenge the status quo.

So, is this really the end of PML-N and Pakistan’s three-time PM? Will Nawaz Sharif survive the ruthless conditions of prison? A lot can change in a matter of days.

Prime Minister Imran Khan has reinforced his stance of ‘not resigning’ at the hands of any march or sit-in. As of now, the PPP, PML-N, and JUI-F plan to enter Islamabad and leave with the PM’s resignations. However, the chances of that happening seem very bleak.