A Mother Guns Down Her Son's Killer After He Was Set Free By LHC!

In Sialkot, a mother’s grief of losing her son made her take justice in her own hands. After the alleged murderer of her son was released from prison, Parveen gunned him down herself.

Seven years ago, her son Tasleem only 21 years of age was killed by a man, Nouman over domestic issues. According to the sources, Parveen lodged a case against the suspect in the lower court. Soon after the proceedings and trials, Nouman was found guilty and was served with a death sentence.

Nouman later filed a plea in Lahore High Court against the sentence awarded to him on murder charges. Further, in April 2019, on the grounds of lack of evidence, Nouman was set free as an innocent man. Moreover, after being released from prison, Nouman left for Dubai and stayed there for a few months. Little did he know that upon his return to Pakistan, his death awaits – at the hands of Tasleem’s mother. 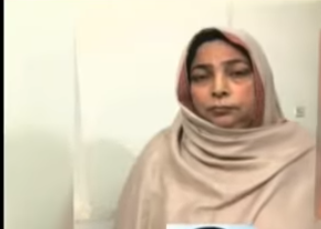 Now, a case has been filed against Parveen including the four accomplices that helped her kill Nouman. In addition, the police have arrested the mother but are in search to track down and capture the other individuals. Moreover, the sources suggest that Parveen’s son wasn’t innocent either. There have been two murder cases on late Tasleem’s head that have been registered in the past.

These cases of family feuds and taking lives for revenge is common in Pakistan. In some cases, the enmity lasts several generations. Further, there are a plethora of such cases that arise within the country; some extremely petty and insignificant. Like the 22-year-old man that opened fire at his own parents on receiving a high electricity bill.

In today’s time, family relations have become weak and fragile; easy to break on a mere disagreement. Sadly, Pakistan is not just suffering economically, but morally as well. Moreover, moral corruption is not treatable like the unsteady economic conditions. From rampant rape cases, molestations, kidnappings including that of Dua Mangi and the gross mindset that resides within the minds of the majority, will be the downfall of Pakistan.

In a nutshell, Pakistan may be making slow but steady progress on an administrative level but the ground realities of each individual make one lose hope for this nation. Everything is chaotic. Sadly, the religious sector isn’t doing a great job either. Instead of truly using their enlightenment and knowledge to spread the word of god, they are either embroiled in rape controversies or busy playing politics.

The concerned institutions need to see the bigger picture and work accordingly.

PSL 2020 Released And Retained Players For All Six Franchises!
COAS General Bajwa Flies An F-16 On PAF’s Sargodha Base Visit!
To Top