A Short Series: Talk With A Covid Killer

This story has been submitted by Abdullah Tariq.

“In your society, people fear a gun more than God. Do you never think that if they were afraid of God, then people like me would’ve never existed?”

This dialogue from our short series ‘Talk With A Covid Killer’ depicts the mindset of the people in our society. What we have tried to accomplish is to show the double-standards and the dark side of our society, something that most of us often ignore and don’t even like talking about in our lives. 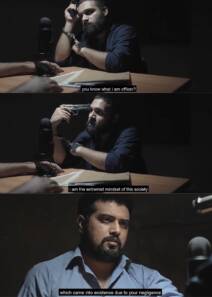 What is Talk With A Covid Killer?

‘Talk With A Covid Killer’ is a short debut-series, comprising five episodes. It revolves around a killer (played by Usama Nadeem) and an officer (played by Abdullah Tariq). The series starts with the detective interrogating the killer in a dark room. There is no apparent tension between them in the beginning, but it soon starts to become evident as the story progresses. What seems to be an open-and-shut case soon becomes a race against the clock. It is a tussle between right and wrong. It is about two mindsets of our society justifying their actions. It is about how naïve we are and how little we know about the very society we live in. In five episodes, we have tried to cover taboo topics to create awareness among people. And we didn’t shy away from discussing the dark and filthy side of our “civilized society.”

We started working on a short series about three months ago. Once the script was ready, the next critical step was to convince our parents and ourselves to move forward with the project. At first, it seemed like we could complete it in just a week. It wasn’t even that Christopher Nolan was helping us, but we just had this self-confidence to complete it without any problems whatsoever. But it took us several re-shoots, re-takes, screams to vent out frustration, and a lot of dedication to complete the project.

The cast of Talk With A Covid Killer

Usama Nadeem (Killer): Usama Nadeem is an aspiring filmmaker who is studying at the New York Film Academy. He can be extremely blunt when he in front of the camera. He has always tried to highlight and create awareness with his content.  And so, ‘Talk With A Covid Killer’  is his debut as an actor and director.

Abdullah Tariq (Officer): Abdullah Tariq is a web content creator with a passion for writing short stories and plays. He is a telecommunication engineer who wants to pursue a career as a writer. He starred in this series with no prior acting experience. 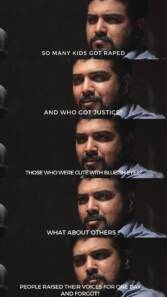 With each episode, we tried to cover one topic while also ensuring that we don’t deviate from the main storyline. The average length of each episode is between 10-15 minutes only.

Episode 4: Birth of a Demon

So far, the response from the viewers is overwhelmingly positive. As we tried to show the dark side of our civilized society, we had some serious concerns about not getting positive feedback from the people. But it all changed when we uploaded the series on YouTube on 20th June, 9 PM. Now, we’re hoping that it reaches a broader audience.

Where can you watch it?

You can watch ‘Talk With A Covid Killer’ on YouTube. Here is a link to our series: https://www.youtube.com/channel/UChvjwBIbvwCzj4GXwQwPx6w

We’re hopeful that we will be successful in sending a clear message to the viewers. As there is the use of abusive language in the short series, we urge you only to watch it if you don’t get offended/triggered by abusive language or taboo topics. Please do share your valuable feedback.

Pakistanis Continue #JusticeForJulie Demand After Trans-Activist Remains In Adiala Jail For 5 Days
A Paper Explaining The Origin Of The Solar System & Life On Earth!
To Top