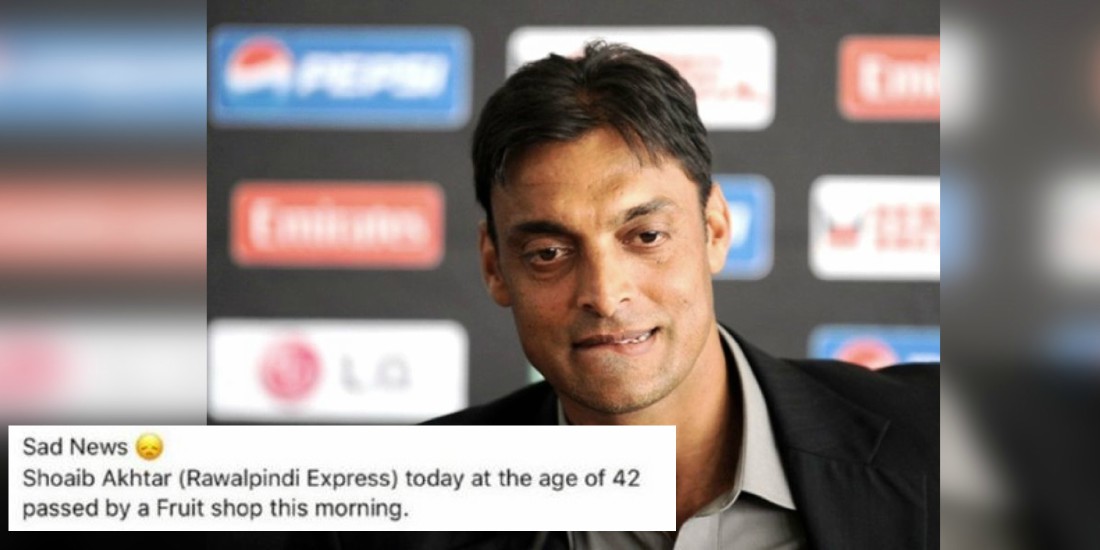 Yesterday, when we were busy in celebrating the final of Pakistan Super League Season 3 because, as a Karachitte, it was an achievement that international cricketers came back after a gap of nine years. Just recently, a news circulated on social media which gave a mini heart attack to all the cricket fans and it was about Rawalpindi Express, Shoaib Akhtar’s death!

A random guy, Ahsan Kamal Pasha posted on his Facebook profile that, “Sad News. Shoaib Akhtar (Rawalpindi Express) today at the age of 42 passed by a fruit shop this morning” and his “passed by” took social media by storm. Although, the guy later removed the post but bro, screenshots ka zamana hai! 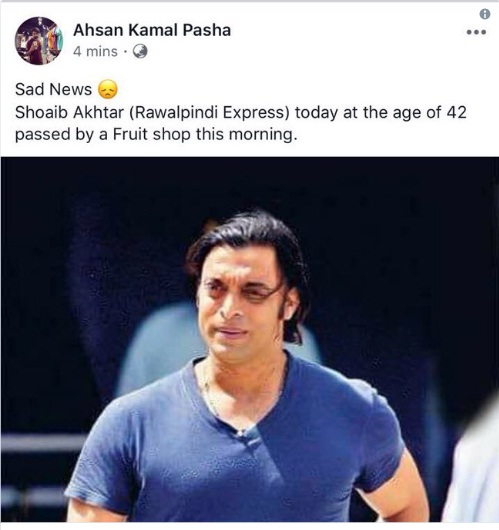 Rawalpindi Express got the point, he informed his fans through Twitter that it was nothing but an effort to get fame.

So i pass by a fruit shop every day guys , the joke falls apart ?
Good try buddy!!#shoaibakhtar #Rawalpindiexpress pic.twitter.com/m1rTZPa8b4

Unlike Shoaib Akhtar, his fans didn’t set cool and criticised the person who spread the false news.

Yes, Guys, Not Funny At All!

This is NOT funny ????
Before I read the entire tweet my heart stopped beating for a second!

This Fan Got A Mini heart Attack

I got a mini heart attack ?

Love Across The Borders!

Blessings for a healthy and long life Shoaib Sir. Love from India

What A Perfect Reply Sardar Jee

What Could It Be, Dear?

Ther must be something deep. Dig it!!

Yes, For Those Who Are Still Unable To Understand!

This Guy Is Worried About Looks More!

i doubt sir are you really 42 years you look much younger i m 30 looks older then you ?

Shoaib Akhtar, the demonic fast bowler who bowls at a speed of 100 miles per hour has injured some of the best players of the cricket with his killer bouncers! This is the reason why he was titled as “Rawalpindi Express”.

Shoaib Akhtar is the same person who couldn’t walk until the age of 6! He is a real motivation for those who want to achieve success in life.

The child who couldn't walk till age of 6 & he became the fastest bowler in the history of cricket so don't stop dreaming ..my knees now.. pic.twitter.com/F7Ou5OGY5X

However, due to a misconception, the legendary bowler considered was considered “dead”. No doubt that the social media is an open platform for everyone and you are allowed to say whatever you want, whether is it about political leaders or cricketers. It has become easy to make fun of the people we dislike but yes sometimes, your little jokes might become a reason for trouble. So, be careful about writing and understanding words!