The Pakistani media industry is filled with great journalists who are observing and providing civilians with information regarding the country. Simultaneously, due to the political instability problems such as corruption, money laundering, bribery the credibility of journalism.

Anchorperson Shehzad Hassan revealed in an interview, that he is bidding well to the media industry after his salary got deducted to 50% of its actual amount. As much as the economy of Pakistan is restraint at the moment, it is difficult to provide food, ammunition, and shelter to almost everyone. 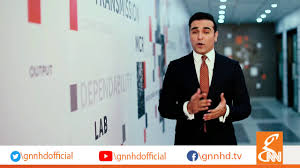 Hence, the anchorperson comments during the interview that he is no longer going to be associated with the world of media and wishes to explore his options and opportunities elsewhere.

Shehzad Hassan gets many offers

“I have three children and eight dogs,” Hassan tells during the interview, “Although, I am getting many offers from other channels, I don’t want to take part in media any longer.”

However, the statement seems to be legit, it does make us wonder, are eight dogs really a priority or a luxury. And how can this anchorperson just categorize dogs and his own children in the same category?

Thus, while we were busy thinking over this statement, netizens are trolling him on social media regarding this smooth, suave slip up. From noting that Hassan might be pro-PMLN, to much worse comments regarding his statement.

On a lighter note though, these statements sure are hilarious.

The netizens have a ball reminding Hassan about the priorities of life. Some even suggest that he lets go of his dogs from 8 to 4; perhaps that will help him to cut down his expenses.

Simultaneously, Hassan also mentions that the only reason why he is leaving the media industry is because of the alleged restrictions in journalism. He feels that he isn’t free to give his opinion.

It makes us wonder whether he is secretly targeting anyone or government official with that statement; provided the fact that just a little while back Asad Umar’s controversial tweet became a sour spot for them.

It also provokes and identifies the fine line of classicism that is prevailing in Pakistani society. It shows that with the frequency and flow in the circulation of money, the birth of classicism and priorities tend to differ. Thus, discrimination increases and so does the practice of even more social issues.

We wonder will there be a time when these social issues come to an end. And we also hope that Hassan finds a job that pays him well and he gets a chance to feed his eight dogs – and children also!

19 Pakistani Celebrity Siblings Who Are Always Supportive Of Each Other!
Jashan-E-Azadi Celebrations Turn Tragic – Road Accident Kills Two Boys In Karachi On Aug 14
To Top