In this famous show of Reema Khan, Shehla Raza, invited as a guest, talks about the tragic demise of her children in an accident. In this video, she also calls out all those bullies who don’t respect a mother’s plight but poke fun with sarcasm and taunts.

Shehla Raza and her tragic story

It is surprising that the hostess Reema Khan didn’t already know about the tragic story of Shehla Raza. She sporadically asks Shehla Raza about her children who then went on to talk about it with strength and patience. Of course, it is not easy for any parent to see their children leave them in this world and that too, together in one stride.

It just brings tears to our eyes listening to her explain every bit of the accident – what caused the accident and coping with the tragedy has been so far for the brave politician.

Upon being asked, she patiently recollects over the incident that took her children’s life – a girl and a boy: 13 years old and 11 years old respectively. She goes on sharing the tragic anecdote that occurred 15 years ago on the third day of Eid. She mentioned it was due to a reconstructed road right in front of her house where a drain was under work. Then she talked about all the details of the accident with her emotions calm and collected. 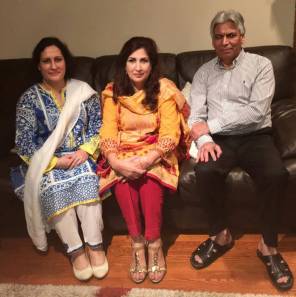 What she learned from the incident

“You mentioned that you’re missing your son. I know how a mother feels. When she’s a mother, she only feels like a mother” she said upon reflecting on her past. “You are no longer a wife or any other entity but a mother. It is unfortunate that we lost both of our children in one day. It was the third day of Eid,” she adds.

After this incident, I got stronger and more confident. Whenever bullies bully me I know how to handle them. They say, churial you have eaten your kids, not at least help the children of Thar.”

Adding to that, she also mentions how people have made her fake accounts. “They put up my pictures and say awful things which is not the worst part but when they touch the subject of my children. It just shocks me what sort of people would do such a thing?” From the way she rhetorical lays down these questions, one can hear the pain of a mother who’s pain is much bigger than we can imagine.

“What morality do they abide by? Which leader do they follow that they don’t even leave a mother in peace?” she further asks.

This needs to stop

Not just for the sake of a mother in pain, this attitude by the public needs to stop. It has only caused people distress, and in worse cases, committing suicide. We have quite many such stories as evidence and if you’re really listening, you will go back to all those times when you caused someone pain. Try not to do that. Cyber-bullying needs to stop!