The former premier of Pakistan, Nawaz Sharif’s health has been getting worse with time. The Pakistani doctors strictly suggested for treatment abroad upon judging the severity of his health condition. To this, the incumbent government advised the PML-N leader to seek medical treatment abroad, however, on its own terms. 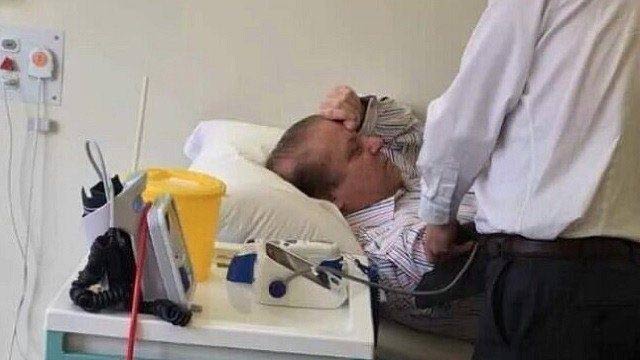 Nawaz didn’t agree with the terms and conditions applied by the PTI government and deemed them as ‘illegal’. Meanwhile, the party workers have been making tireless efforts to free their leader by whichever means possible. Although they haven’t been successful so far. After many tussles, Nawaz finally agreed for treatment abroad and the government prepared to remove his name from the ECL [exit control list] within the next 48 hours.

Of course, this news created a ruckus within the country and news channels replayed Imran Khan’s statements vowing to never grant the robbers NRO or let them leave the country until their debt is paid in full. However, the preparations to take Nawaz aborad are underway. But, the government couldn’t allow Nawaz to leave without any legal assurance of his return. Hence, Nawaz’s brother, Shehbaz did the honors of making sure his brother returns to complete his sentence. 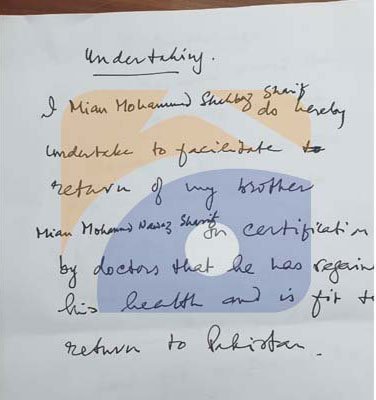 On Saturday at the Lahore High Court  (LHC), PMLN president Shehbaz Sharif wrote a letter of assurance that clearly stated that his brother will return to Pakistan whenever the doctors allow him. After the hearing resumed today, LHC asked Sharif’s counsel to submit a draft of the undertaking that Nawaz will return once treated.

Additional Attorney General Ishtiaq A Khan informed the court that if Nawaz doesn’t wish to hand over the deposit bond to the government, he can submit it to the court. Moreover, he said, “We will have no objection if Nawaz Sharif wants to go abroad for treatment.”

A few questions were placed for the parties to answer by Justice Ali Baqir Najafi and Justice Sardar Ahmad Naeem.

The questions set forward by the court included:

Whether the name of a convicted person can be removed from ECL? Secondly, can one-sided conditions be set for removing a person’s name from the ECL? Thirdly, what will be the status of court orders if the sentence is suspended? Fourthly, whether the parties can change their stance regarding an indemnity bond? Fifthly, was the memorandum issued on humanitarian grounds? Sixthly, can anything be separated from the memorandum? Lastly, can the terms set be separated?

The federal government and NAB submitted their replies to the court.

All in all, Shehbaz has submitted the undertaking which is proof that Nawaz will return to face the courts after he is completely healed and is given the green light by the doctors. Moreover, Federal Minister for Science and Technology took a jab at the affidavit, saying it only entails that Nawaz is never returning after this escape.

Hopefully, that will not be the case and Nawaz will face the music that will await him in Pakistan.

What are your thoughts about this? Let us know!