Smoking Sheehsha Can Cause Divorce: Know-It-All Allama Naqvi's Back At It Again

For those validating Allama Zameer Naqvi as a legit ‘scholar’ and ‘Allama’ should know these piles of books in his background are never read. They came all the way from secondhand bookstore to his shelf, only to sit idly whilst marking their presence on the screen. Better yet, it’s a wallpaper – a frivolous backdrop that can fall with a single blow.

Try blowing a puff of smoke from your nose right through the screen and there’s a chance something might fall. You never know!

I mean, for anyone paying keen attention to Allama’s saying, “Exhaling smoke from the nose can result in divorce and devastation of life,” I have nothing to recommend you further after this. All we know is, Allama is back again, leading us to the path of righteousness….. of entertainment, maybe.

Yes, you’ve heard him right. Allama Naqvi can certainly predict the future of the spoiled youth who, as he says, “smoke hookah, exhale from mouth and nose, and then post it on social media. They have called wrath upon themselves. This will call divorces in the future. They will never lead a successful life.”

What are the people saying?

So we looked into the comments section and found some criticism hurled at the pious know-it-all scholar. One of them is suggesting a different title for the scholar, while some are pointing at his paan-stained mouth. 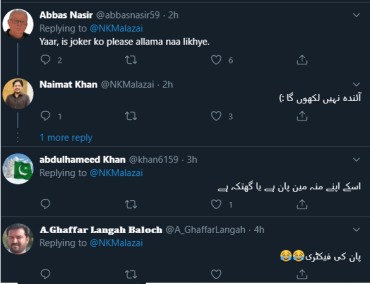 However, this is not the first time our beloved Allama managed to grab our attention. He has made some very interesting connections in the past, and we are still in awe for those.

To all those poking ways more fun in this as it should be, I think it is time to calm ourselves and “really” listen to what Allama Naqvi really intends in return to his lectures. Either he is bored out of his life, sitting quarantined, so he thought to entertain everyone. Or, he is really just concerned about the youth.

I mean, sure. Flaunting your smoking skills are quite a “middle class” now. We need to up our game and see where else the smoke can come out from (warning: don’t read too much into this) and maybe then our potential spouse will be impressed.

What do we conclude now?

Well, I’d say we should credit him for thinking way ahead of us and letting us know we are still lagging behind. We, as a youth, should know where we are headed — should know what could better us. We should know our talents. If we don’t keep up, certainly a better competitor will show up flaunting his talents and we would be demoted as the cheering crowd.

In that stance, we should thank Allama Zameer for taking out time to help us see the reality and be ahead of our game. If not for him, we would have remained clustered in lies and done nothing about the future, knocking at our door with nothing but shame.

Let us know what you think of the story in the comments section below.