Pakistan politics serve the nation with some great dose of entertainment on a regular basis. Be it some political personality bashing the other or someone satisfying their inner demons with haram drinks, media houses are piled up with new stories every morning which are bound to be in the news for the day.

One of the famous political personalities of the country was in hot waters last year when the former Chief Justice of Pakistan (CJP) Mian Saqib Nisar made a surprise visit to his hospital. The matter somehow vanished from the mainstream media as soon as Nisar resigned. 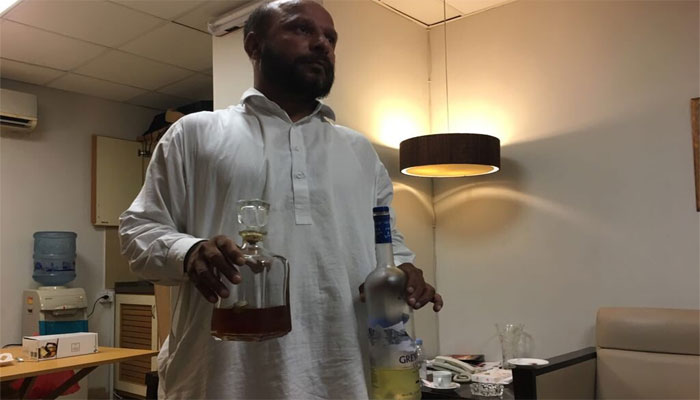 Recently, Sharmila Farooqi who is also affiliated with the political party PPP was invited as a guest on Waseem Badami’s ongoing Cricket World Cup transmission. The political personality was asked several controversial questions by the anchor which she answered quite calmly and logically.

Starting from Sharmila’s mentor Asif Ali Zardari’s recent arrest and her absence from the media on the matter to her marital life, she answered them all. She even termed Pakistan Muslim League Nawaz (PMLN) better than her own party at governance and confirmed that her marriage was really a one-dish affair.

In the bouncer round where the guest has to answer in a Yes/No manner, the anchor threw something really controversial towards Sharmila. Badami asked her about the bottles confiscated from Sharjeel Memon’s office last year and was it really honey and olive oil in the bottles to which she confidently said “NO”. Her response made Badami laugh really hard.

Here’s the clip from the show!

It is confirmed that Sharjeel Memon is not SOBER anymore. Well, the case is still in the courts but no sign of proper verdict is seen.

Liked the story? The comments section is all open!

Yasir Hussain And Iqra Aziz Might Be Getting Married This Year!
PMLN MPA Tahir Jamil Is Accused Of Raping His Minor Maid Saima Multiple Times In Faisalabad!
To Top