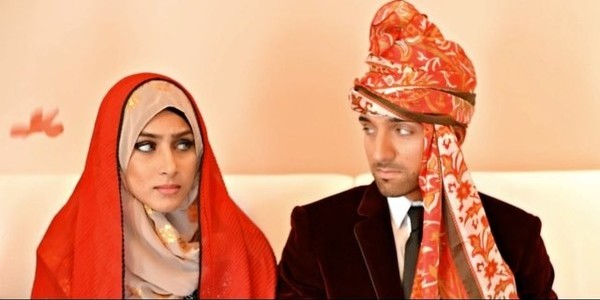 Every Pakistani household is confronted with the greatest problem during the wedding season;what to wear? So this conversation is followed by several visits to the designers and tailors and then after wasting hours (in fact days) in shopping, a dress is usually purchased.(It is ironic that thousands of rupees are squandered on a dress whose utility is just for a few hours). Then there comes the question of makeup, appointments are reserved, followed by 2-3 trips to the beauty saloons as if the ladies are attending the coronation of the Queen of England. This makes them appear as Emelia Recolleti of the abominable bride of BBC Sherlock.

The bride (referred to as Shakeela) comes all loaded in jewelry and looks like a cow for slaughter,rather than a human being.

The groom usually wears red turban, despite having a dark complexion and appear as Rajhastani nomad rather than a groom.

There are several types of people who attend a wedding;

The Girls (referred to as birds)

They wear very bright and colorful dresses and hence labeled as birds,they don too much make up and walk here and there to gain attention. They laugh very loudly on the lamest jokes to appear cool. They are usually heard aying;”Chalo dulhan ko daikh kr aatey hain.” As if the bride is ascended from another planet.

They are just interested in Biryani. They tend to enjoy it, and usually refill their plates with the dish as soon as new lot has been transferred in the bowls. These guys tend to feel like aliens in these festivities as they are unable to find anyone to discuss their topics of interest. They tend to observe everyone and consider them idiots.

These guys taste a little bit of everything and that is enough for them. And then comes the most awaited time, when all the good looking decent ladies and gentlemen transform into the most malnourished beings (as they rush towards the tables especially in Memon weddings) of the world. People set their feet on others, they dribble with serving spoons in the dish for their favorite piece of meat, and they spill it on other’s dress. And hence the main event comes to its logical conclusion.

Where are Shakeela and Ghufran?

So these two are sitting on the stage like some idols and have pasted a diplomatic smile on their faces and people tend to ascend the stage to greet them. Then there comes the photo session at the end, here all the relatives come to have a snapshot with the couple. The most interesting people are the photo bombers ( the kids who walk at the back to come in the photos).

And then finally the wedding ends with everyone rushing to their homes. In just four hours millions have been squandered. Who says Pakistan is a poor country?