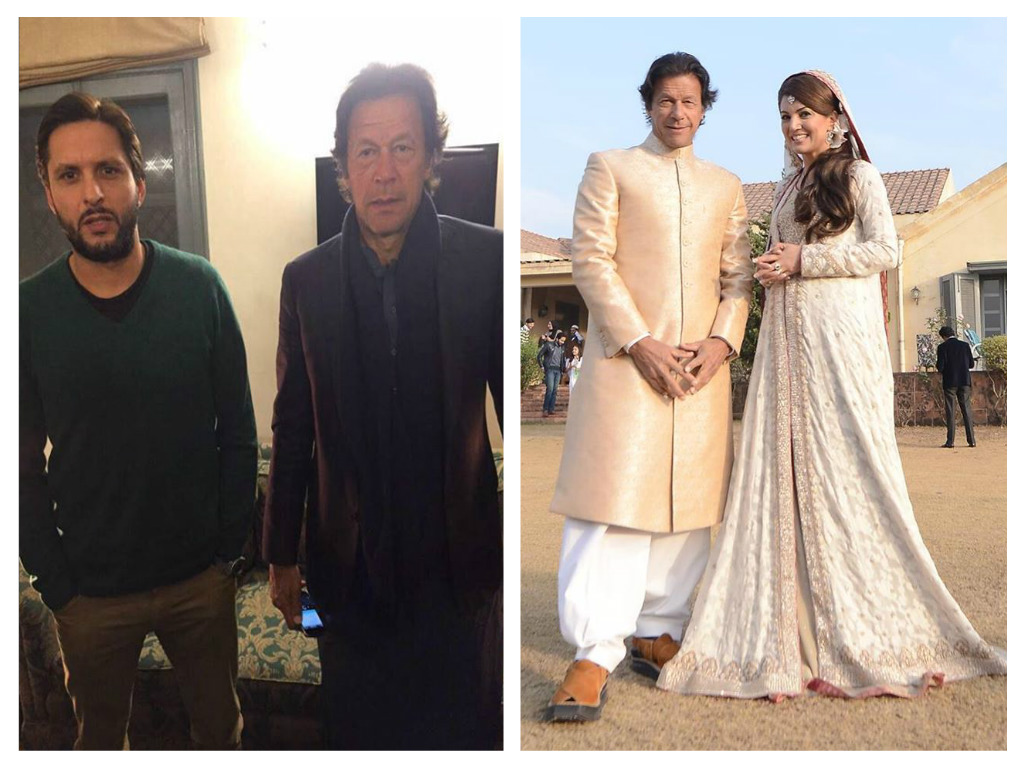 Late last year was when news started spreading about PTI chairman Imran Khan and TV anchor Reham Khan’s wedding. Though the couple initially denied any such claims, it was later figured out that Reham Khan herself broke out the news to British media as she had contacts in UK media.

January this year, however, Imran Khan revealed the news at Heathrow Airport before boarding on the plane coming to Pakistan. According to news, he had gone to UK to meet his ex-wife and his sons in London and took them in confidence regarding his second marriage. This and other public revelations by Mufti Saeed and the then PTI leader Mohammed Naeem Iqbal confirmed that the 62-year-old Pakistan cricketer-turned-politician, who divorced heiress Jemima Goldsmith in 2004, had officially wed 41-year-old broadcaster Reham Khan.

Reham Khan, who had hosted TV shows, was also a broadcast journalist at BBC. Coming to Pakistan in 2013, Reham worked at News One, Aaj TV and then at PTV, ending up at Dawn News where she currently hosts The Reham Khan Show, a programme celebrating Pakistani heroes.

Imran Khan, on the other side was tried to be persuaded against marrying Reham Khan by both, his family and political party. But Imran Khan has always been the kind who’d do what he thinks is the best for him.

When the news of the marriage officially broke out, social media took on the role of both criticizing and congratulating the couple on the marriage. Politicians and celebrities from all over the world congratulated both Imran Khan and Reham Khan, and considered this wedding something to cherish about in the dark political period at that time.

While the opposition took charge of criticizing Imran Khan on his new marriage, his close friends didn’t let him feel any kind of guilt or criticism. Twitter was filled with messages and wishes from all of the couple’s close friends.

One of those many well-wishers was Imran Khan’s close friend and more like a younger brother, Shahid Afridi. Being one of the first few to wish them via a tweet when the news got official, Shahid Afridi later on went to meet the newly-wed couple at their residence in Bani Gala. The gathering was not just limited to Shahid Afridi presenting gifts to the couple and being offered barbeque, but also included Imran Khan giving tips to Shahid Afridi for the then forthcoming Cricket World Cup.

Imran Khan however, is not the only one who fancies Shahid Afridi both as a person and cricketer. His wife, Reham Khan, also admitted in a later interview that she too is one of the many girls who most certainly like to watch Shahid Afridi whenever he’s on the cricketing field. According to her, “Shahid Afridi looks good while setting his hair on the pitch”.

It will be interesting to see, however, whether Imran Khan plans to go on a ‘dharna’ for this statement of hers. This time, hopefully, there will be no rigging of any sort involved.

6 Greatest Pakistani Festivals You Did Not Know About
Pakistan Trains Their Female Commandos To Fight Taliban!!
To Top