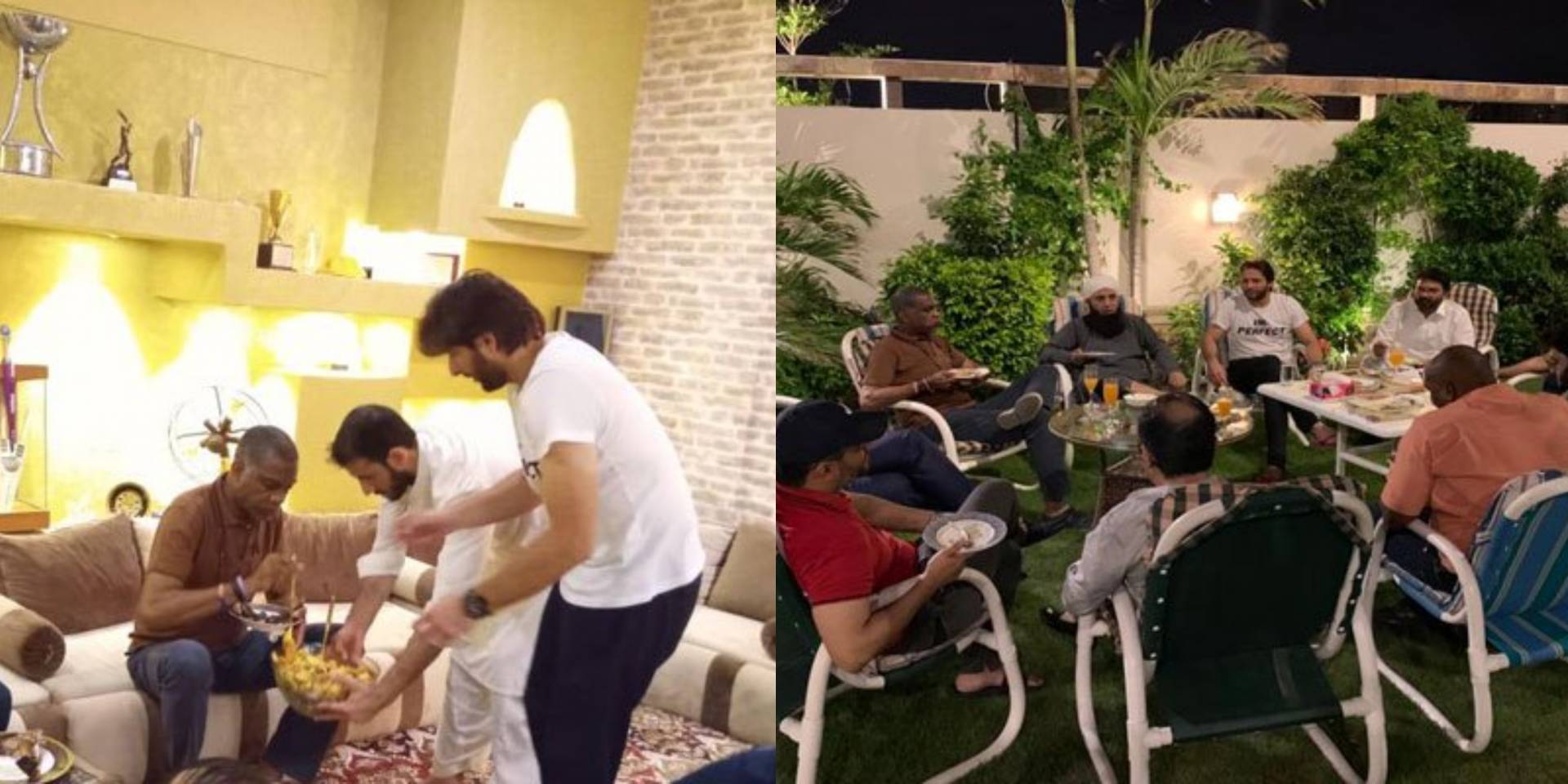 Shahid Afridi the former Pakistan captain hosted a dinner for the West Indian legend Michael Holding on Sunday. The dinner was held in Karachi at Shahid Afridi‘s residence in DHA.

The 65-year old cricket legend who played 60 Tests and 102 ODIs accompanied by Caribbean cricket commentator Barry Wilkinson is currently on a private visit in Pakistan. His aim for the visit is to take away the fear of security issues from people around the world which they have regarding Pakistan.

He wants to spread the message that this country like any other country is safe to visit. And the rumors about it being a dangerous country to visit are not true. It is a lot safer than people could think.

While he’s here in Karachi since last week he is having a great time. The legendary pacer has been visiting various places and enjoying the taste of some traditional food in the country.

Michael Holding attended a Majlis a night before he had dinner with Afridi on Sunday. There he had Haleem and Biryani, the photos of it went viral as he could be seen delighted by the food.

However, at Afridi’s dinner, the cricket icon was served with Pashtun food which he fell definitely in love with. He is already known for his wonderful hospitality so it was expected no less.

Later in a tweet, Afridi posted photos from the dinner hosting Michael Holding. Many other cricket legends were also spotted on the table alongside the former foreign players. One of them was a former Pakistan captain, Saeed Anwar.

Afridi expressed how honored he was to host the legendary Michael Holding at his home for dinner. He was also grateful to Dr. Kashif who arranged the legend’s visit to Karachi and to Saeed Anwar who joined him for the dinner.

A real honour to host the legendary Michael Holding for a dinner at home. Thank you Dr Kashif for arranging Michael's visit to Karachi. Also thank you to Saeed Anwar for joining us. Great to have some legends visit me. pic.twitter.com/Rg2JQnDxXx

Michael Holding was spotted earlier with his fans in a local shopping mall in Karachi and was hosted by former cricketers Zaheer Abbas and Sikandar Bakhat in Karachi. Yahya Hussaini also posted a picture with him on twitter.

It is also expected that the legend will attend the third One-day International (ODI) which is taking place at National Stadium in Karachi between Pakistan and Sri Lanka on 2nd October.

With the virtue of Holding and Sri Lankan team visit to Pakistan, it is said that in future other teams might also agree to visit the country for international series.

The cricket veteran Michael Holding said in an interview that it is not just to isolate Pakistan from the game because of something that happened ten years ago. Every country gives priority to security precautions and so does Pakistan.

“If I had any apprehension or fear of security, I wouldn’t have come to Pakistan. I have no problem here. It is good and encouraging news that the Sri Lankans are here to play international matches,” he added.

This is the second bilateral series Pakistan is hosting on its land since 2009. As in the year, the Sri Lankan team got attacked on its way to the Gaddafi Stadium in Lahore. Ever since then Pakistan became an abandoned land to cricket.

However, the first match of the PAK-SL series was washed out on Friday because of a heavy thundershower and the second had to be rescheduled because the field was too soaked with water. So the second match is now to take place on Monday at the same venue.

Due to the security concerns ten senior Sri Lankan players had opted out of the tour. Hence. the board announced a depleted squad for three ODIs in Pakistan.

The Dark, Intense Trailer Of Sarmad Khoosat’s ‘Zindagi Tamasha’ Has Got Everyone Waiting For It!
Pakistan To Invite Manmohan Singh For Kartarpur Corridor Inauguration
To Top