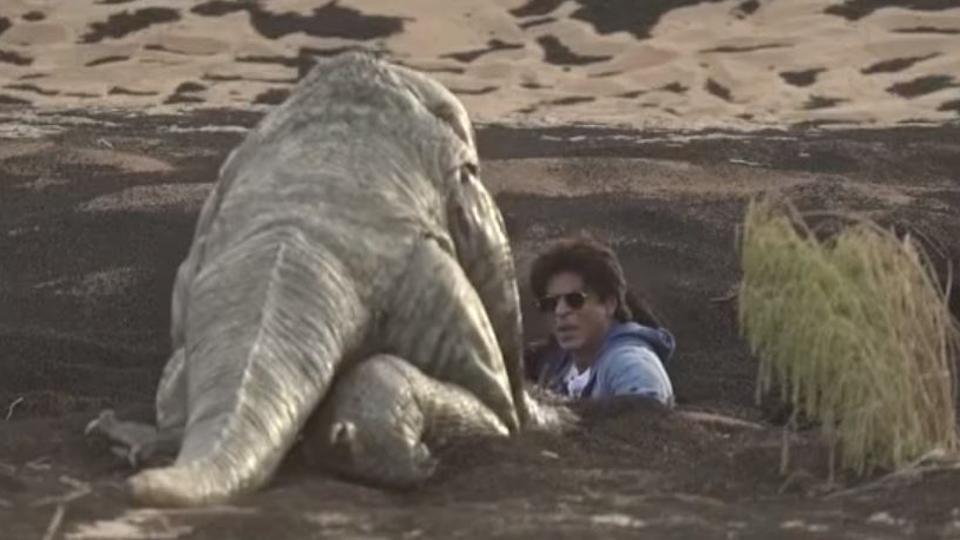 King of Bollywood Shah Rukh Khan – an actor known worldwide for his breakthrough performances! Shah Rukh Khan was in Dubai for an interview, during which Egyptian prankster Ramez Galal pulled a prank on him. The show goes by the name of Ramez Taht El Ard (Ramez Underground) and the prankster is known for staging life-threatening pranks on international celebrities such as Paris Hilton. Speaking of which, Paris Hilton even ‘sued’ the show and the team for faking a plane crash, which was later reported the all of this was a stunt.

It all started when Shah Rukh Khan’s car stopped working in the middle of a desert while he is on his way to an interview with TV presenter Nishan. The car sinks in quicksand and Shah Rukh Khan, while being a gentleman he is, tried to keep Nishan and another calm as they were all afraid of sinking. Out of nowhere, a Komodo dragon appears and continues threatening the group which was sinking in quicksand.

After numerous hisses by the dragon and screaming by the group, Galal pulls off the mask and reveals himself. It was none other than the prankster himself and this fumed the actor even more!

“This is nonsense you got me all the way from India to do this sh*t?,” lashed the actor who was fuming as soon as Galal revealed himself. The actor was on the verge of punching the prankster. He even pushed him down and kept saying how none of this was funny and that this is all “ugly”.

The prankster kept apologizing, stating how he deeply loves the actor and that he needs his forgiveness.
All of this drama caught more than a million views within hours of posting, with people speculating how this is staged.

Anyway, after a lot of apologizing, the prankster started singing Khan’s Billu Barber’s Maar Jaani Maar Jaani, which brought a smile on the actor’s face who then left the sets.

Later on, Galal posted a selfie with Shah Rukh Khan, sharing how everything is perfect between the two.

Watch these videos for yourself and be the better judge, for it seems quite prominent that it was all staged. Shah Rukh Khan, while being in the industry for years, has never lost his cool in front of the cameras.