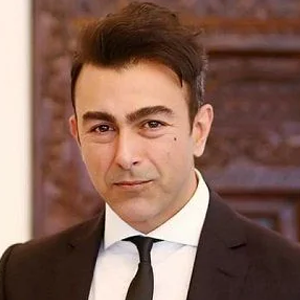 Shaan Shahid is one of the most popular actors in the film industry of Pakistan. He is an actor, director and producer. As an artist, he has been able to contribute massively to the film industry. He has done more than 500 films. 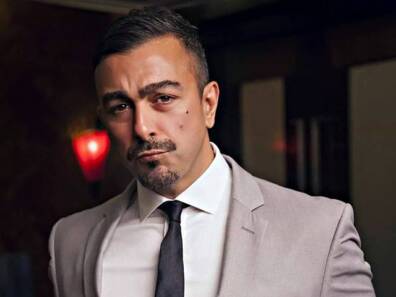 He is indeed one of the biggest superstars the Pakistani film industry has ever produced.

Shaan Shahid was born on 27 April 1971 in Lahore to film director, Riaz Shahid. Her mother Neelo was a theatre, film and television actress.  His father was a Muslim whereas his mother was a Punjabi Christian. She later embraced Islam. Fiaz Shahid, his paternal uncle, was a producer and cameraman for PTV in Islamabad.

Shaan’s early education started at the very famous Aitchison College. The first acting venture of Shaan came at a boy-scout bonfire. Shaan Shahid had won the best actor award in a play known as Alif Noon, playing a comedy character. However, Shaan never took acting seriously as a career. After Aitchison, Shaan left for New York, USA. He joined Newtown High School. Shaan always wanted to become a lawyer. However, his plans changed and he then returned to Pakistan for vacations taking up the family business, Riaz Shahid Films. When he turned 19, Shaan did his first film Bulandi. It was released in the year 1990. 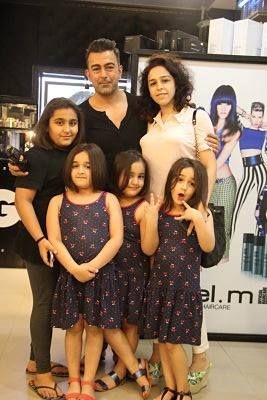 As an actor, Shaan Shahid made his debut with the film Bulandi in 1990. He made his debut opposite another debutante Reema Khan. Since his debut, Shaan has appeared in several Urdu and Punjabi language films. In 2013, Shaan starred in the highest-grossing film of the year “Waar”. The film was directed by Bilal Lashari. The film had Shamoon Abbasi, Aisha Khan, Uzma Khan, Ali Azmat, and Meesha Shafi in lead roles. Shaan received massive praise for his performance in Waar. The actor won the Best Actor award at the 1st ARY Film Awards. 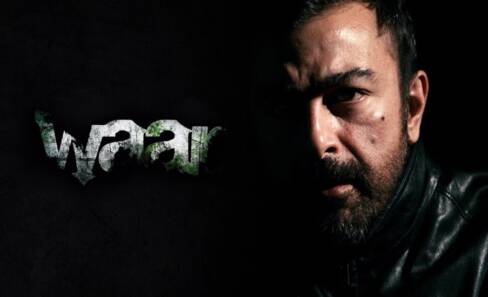 After the success of Waar, the actor appeared in Jami’s O21. His co-stars included Iman Ali, Aamina Sheikh, Ayub Khoso and Shamoon Abbasi. In 2015, Shaan starred in Yalghaar alongside Adnan Siddiqui. The film was directed and produced by Hassan Waqas Rana. The film was the most expensive film in the history of Pakistani cinema. It had a total budget of Rs 50 crore. Shaan also starred in a dance-based film by the name of Naach (2013). The film had Momal Sheikh, Javed Sheikh and Neil Uchong in lead roles.

Shaan was keen on creating an impact on filmmaking in Pakistan. As a result, he launched himself as a director. Shaan directed his ambitious film project by the name of Guns and Roses – Ik Junoon. The film was released in the year 1999. The film was produced by Tanvir Fatima Rehman. Shaan also co-starred with Meera, Faisal Rehman and Resham in pivotal roles. The music of the film was given by M. Arshad. The film’s cinematography was by Azhar Burki. The film was written by Pervaiz Kaleem.

Shaan also had a short stint in TV. He joined Geo TV and hosted a morning show by the name of Geo Shaan Say on Geo News. However, Shaan had soon left the show as he wanted to focus on developing his film Waar.

Working as a brand ambassador

Shaan has also worked as a brand ambassador. The actor has seen attraction for several of the biggest brands and campaigns. In 2009, Unilever Pakistan also started their personal offering the LUX Limited Edition soap. It was launched at Pearl Continental (PC) Hotel in Lahore, Pakistan. Shaan also endorsed a brand named Pepsi. For Pepsi, he and Ali Zafar helped to improve the solidarity of the brand in Pakistan. Shaan also worked as a spokesperson for Mobilink’s ‘Indigo’ brand in 2004. Indigo had been projected as a big brand for the elite families and executives.

Shaan also performed as a Goodwill Ambassador for ‘One Pack = One Vaccine’. It was a marketing campaign that had been launched by UNICEF, Procter & Gamble and the Ministry of Health for the purpose of eradicating tetanus from Pakistan. Shaan also committed himself to this important cause. He has visited several areas and cities throughout Pakistan. This includes malls and stores in Karachi and Lahore. In 2016, Shaan joint PSL franchise Lahore Qalandars. He became the brand ambassador of the franchise in their second season.

Ertugrul is the most-watched and talked about show in Pakistan. For a while, Pakistani celebrities had been condemning airing of Turkish dramas in Pakistan, while our own industry continues to suffer. Shaan Shahid was one of the few people who started this debate.

He was of the opinion that Turkish shows should not be promoted in Pakistan, and the spending should instead be done on Pakistani cinema. 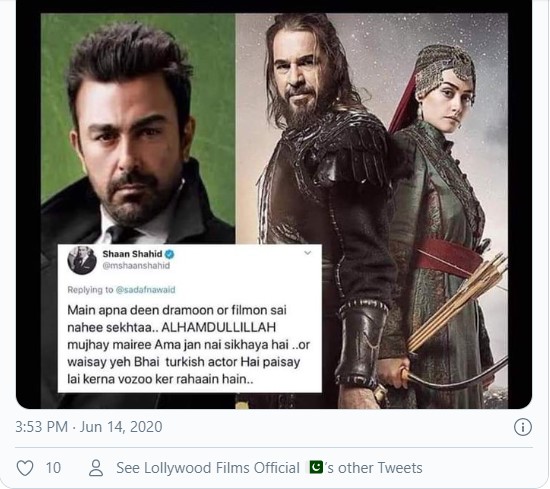 However, later Shaan changed his mind and called the show a ‘classic masterpiece’. Moreover, he made a ‘special thanks’ to the producers, directors, and the cast of the show.

Not only that, but Shaan was so inspired by the show, he even thanked the technicians who worked on Ertugrul. Since then, people have been pointing out how Shaan’s ‘software was updated’. And how he finally realized why everyone was loving Ertugrul so much.

Films as an Actor