Popular Asian matrimonial website, Shaadi.com, has removed a skin tone filter following an online backlash from people. Earlier, when users joined the site, they were asked to select a ‘skin tone’ to display on their profile which included options like fair, dark, and wheatish.

US-based woman Hetal Lakhani started a petition against the website on Change.org following which, the website has done away with an option that allowed users to filter potential matches by the color of their skin. 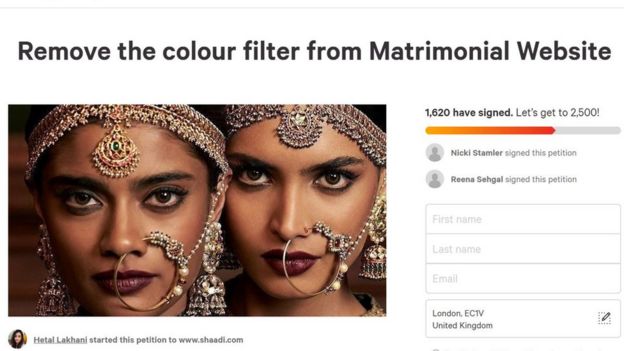 Shaadi.com later said in an interview that it had removed the filter because it was ‘not serving any purpose’.

Lakhani, who lives in Dallas, decided to speak out after she heard about the filter on a Facebook group. “The obsession with fair skin is still notorious within South Asian communities,” she wrote in the petition. It got over 1,500 signatures in 14 hours. “We demand that Shaadi.com permanently remove its skin color filter to prevent users from selectively searching for matches based on their preferred skin color”.

The step to remove the complexion filter comes amid a raging debate on racism and colorism after #BlackLivesMatter becomes a top trend last month.

South Asian’s preference to have a fair bride

It is a common preference by all the South Asian mothers to have a fair bride for their sons. And, it’s humiliating for the girls with dark skin tone.

Priya found her husband on the site after being rejected by others for her skin color. “I am dark-skinned and saw the skin color question on there [shaadi.com]. I answered it the best I could,” she tells BBC Asian Network.

“Remember selecting ‘wheat-ish’ – whatever that means. My mother-in-law was dead against our marriage because I was a lot darker than her fair-skinned, handsome son. Her generation view beauty in shades, which I have hated my entire life. I can’t change my skin tone and it hurts,” she said.

Other than a wish to have a fair and beautiful bride, there are several other bizarre wedding norms and traditions that are being followed by Pakistanis. Also, nowadays a wedding has become a burden to many due to unrealistic and unethical practices.

What’s problematic is that society cheers on these extravagant weddings, but refuses to see what a couple want for a happy long-lasting life. This is exactly why the Pakistani approach to marriage is problematic.