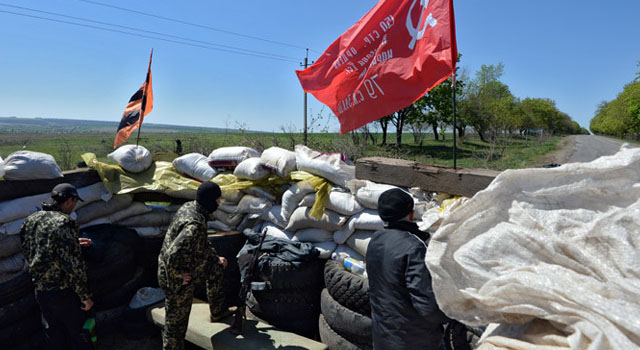 Anti-government activists in Slavyansk have detained military observers who had been traveling with the OSCE mission. The OSCE dismissed the claim of the Ukrainian Interior Ministry that its mission has been detained in Slavyansk.

The Organization for Security and Co-operation in Europe (OSCE) on Friday said that an international military mission has been detained in eastern Ukrainian Donetsk region but the group is not connected to the OSCE observers.

The detained team is “not OSCE monitors” but was sent by OSCE member states in accordance with the 2011 Vienna Document on military transparency, the organization explained on Twitter.

The â€œpeopleâ€™s mayorâ€ of Slavyansk, Vyacheslav Ponomaryov, said that a vehicle containing the international inspectors has been stopped because it contained officers of the General Staff of Ukrainian Armed Forces, military-looking men and munitions.

â€œIt is true that we have detained the bus, as there we immediately found forbidden bullet shells and other munitions. We are currently sorting out who are these people driving inside it,â€ Ponomaryov told Interfax by telephone.

Ponomaryov told Lifenews that the group had â€œcards with marks of all checkpointsâ€ which he says â€œserve as proof of their intelligence activities under the guise of the OSCE mission.â€

Ponomaryov later told RIA Novosti that the situation with the detained group will be resolved â€œby morning.â€

â€œIt is the line-up of the delegation that has raised our suspicion. I had met with the representatives of the OSCE before, we had normal businesslike talks. But back then the line-up was totally different. Now there were some military, more like some special-service agents,â€ Ponomaryov said.

â€œYou have to understand that it is wartime here. We had to detain and check them,â€ he added.

Slavyansk Self-Defense press-secretary Stella Khorosheva confirmed to RT the â€œdetention of a group of armed peopleâ€ actually took place on suspicion there was an â€œinfiltrator among them.â€ Nothing threatens their life or health while the investigations is conducted she said, adding that a detailed official comment could be expected on Saturday morning.

â€œWe are deeply concerned about reports that unidentified gunmen have abducted a Vienna Document inspection team that’s, of course, part of the OSCE and their Ukrainian escorts in the town of Slavyansk,â€ State Department spokeswoman Jen Psaki said.

Earlier Friday, Kiev authorities claimed that an OSCE mission working in eastern Ukraine has been detained by a group of â€œterrorists.â€

â€œOn April 25, 2014, unidentified men stopped a bus with 13 passengers entering Slavyansk from the direction of Kramatorsk. Among them were seven representatives of the OSCE, five representatives of the Armed Forces of Ukraine and a driver of the vehicle,â€ the Ukrainian Interior Ministry said in a statement.

According to the ministry, the bus has been driven to the occupied Security Service building in Slavyansk and the passengers are currently being held there.

The German Foreign Ministry earlier said it had lost contact with the German-led group of military observers dispatched to eastern Ukraine on April 21. According to the ministry, the group is comprised of three German soldiers, a German translator and military observers from the Czech Republic, Poland, Sweden and Denmark.

The group had been traveling with the OSCE mission to Ukraine, AP reported.

The Ukrainian Interior Ministry says talks are ongoing with the anti-government activists on the release of the group.

On Friday, Kiev authorities launched the â€œsecond stageâ€ of the so-called â€œanti-terrorist operationâ€ in the city of Slavyansk, which has been one of the strongholds of anti-government activists in the Donetsk region. In the previous stage of the operation Thursday, five activists were reported killed in checkpoints raids, including a 22-year-old man. Slavyansk activists claim the victims were unarmed and stood guard at the checkpoints only to check the IDs of the drivers and to prevent the troops and Right Sector radicals from covertly entering the city.

Inside Slavyansk, stopping vehicles and checking of IDs by armed self-defense activists has recently become frequent amid a tense atmosphere and reports of forces loyal to Kiev infiltrating the defiant city. Protest leader Ponomaryov on Friday claimed that groups of Right Sector members armed with sniper rifles and night vision equipment have been trying to get into Slavyansk under the guise of the cityâ€™s blockade by the Ukrainian troops.