Telepathy is the stuff of science fiction. But what if the dystopian futurists were on to something? What if our brains could directly interact with each other, bypassing the need for language? The idea isn’t quite so far fetched, according to a recent University of Washington study in which researchers successfully replicated a direct brain-to-brain communication between two people.

In an initial demonstration a year ago, one of the researchers was able to send brain signals over the Internet in order to control the hand motions of another researcher. Now, in a more comprehensive study, the researchers repeatedly were able to transmit signals from one person’s brain via the Internet, and used these signals to control the hand motions of another person within a fraction of a second.

The study tested three pairs of participants (each with one sender and one receiver) who were seated in separate buildings on the Washington campus, roughly half a mile apart. They were unable to interact with one another, except for the link between their brains.

In India, researchers encoded two words (“hola” and “ciao”) as binary strings and presented them as a series of cues on a computer monitor. They recorded the subject’s EEG signals as the subject was instructed to think about moving his feet (binary 0) or hands (binary 1). They then sent the recorded series of binary values in an email message to researchers in France, 5,000 miles away. 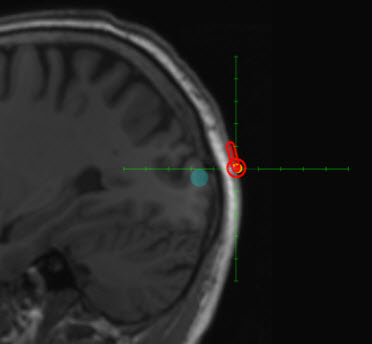 There, the binary strings were converted into a series of transcranial magnetic stimulation (TMS) pulses applied to a hotspot location in the right visual occipital cortex that either produced a phosphene (perceived flash of light) or not.

“We wanted to find out if one could communicate directly between two people by reading out the brain activity from one person and injecting brain activity into the second person, and do so across great physical distances by leveraging existing communication pathways,” explains coauthor Alvaro Pascual-Leone, MD, PhD, Director of the Berenson-Allen Center for Noninvasive Brain Stimulation at Beth Israel Deaconess Medical Center (BIDMC) and Professor of Neurology at Harvard Medical School.

A team of researchers from Starlab Barcelona, Spain and Axilum Robotics, Strasbourg, France conducted the experiment. A second similar experiment was conducted between individuals in Spain and France.

“We believe these experiments represent an important first step in exploring the feasibility of complementing or bypassing traditional language-based or other motor/PNS mediated means in interpersonal communication,” the researchers say in the paper.

“Although certainly limited in nature (e.g., the bit rates achieved in our experiments were modest even by current BCI (brain-computer interface) standards, mostly due to the dynamics of the precise CBI (computer-brain interface) implementation, these initial results suggest new research directions, including the non-invasive direct transmission of emotions and feelings or the possibility of sense synthesis in humans — that is, the direct interface of arbitrary sensors with the human brain using brain stimulation, as previously demonstrated in animals with invasive methods. 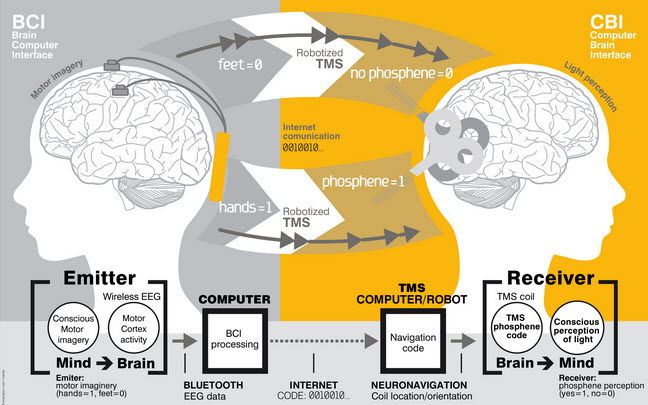 Brain-to-brain (B2B) communication system overview. On the left, the BCI subsystem is shown schematically, including electrodes over the motor cortex and the EEG amplifier/transmitter wireless box in the cap. Motor imagery of the feet codes the bit value 0, of the hands codes bit value 1. On the right, the CBI system is illustrated, highlighting the role of coil orientation for encoding the two bit values. Communication between the BCI and CBI components is mediated by the Internet. (Credit: Carles Grau et al./PLoS ONE)

“The proposed technology could be extended to support a bi-directional dialogue between two or more mind/brains (namely, by the integration of EEG and TMS systems in each subject). In addition, we speculate that future research could explore the use of closed mind-loops in which information associated to voluntary activity from a brain area or network is captured and, after adequate external processing, used to control other brain elements in the same subject. This approach could lead to conscious synthetically mediated modulation of phenomena best detected subjectively by the subject, including emotions, pain and psychotic, depressive or obsessive-compulsive thoughts.

“Finally, we anticipate that computers in the not-so-distant future will interact directly with the human brain in a fluent manner, supporting both computer- and brain-to-brain communication routinely. The widespread use of human brain-to-brain technologically mediated communication will create novel possibilities for human interrelation with broad social implications that will require new ethical and legislative responses.”

This work was partly supported by the EU FP7 FET Open HIVE project, the Starlab Kolmogorov project, and the Neurology Department of the Hospital de Bellvitge.

There are other possible methods for achieving brain-to-brain communications on the receiver end, such as radio-frequency energy (the “microwave auditory effect) and ultrasound, which is covered on KurzweilAI in these articles.

This is the most relevant article: as KurzweilAI reported last year, U.S. and South Korea researchers have conducted an experiment using EEG for the sender and transcranial sonication of focused ultrasound (FUS) to modulate the neural activity of specific brain regions in the receiver’s brain (a rat in this case).

The researchers note the possibility that “potential linking/sharing of neural processing information between individual identities can be conceptually applied to a feedback loop of the neural signal, enabling ‘autologous BBI’”— that is, the information would be fed back to the originating person.

“The findings suggest “intriguing new possibilities for computer-assisted volitional control/communication of brain states between individuals,” the researchers hint. “The BBI [brain-to-brain] method may be used to augment this mutual coupling of the brains, and may have a positive impact on human social behavior” — or negative, if misused.

These methods could be useful as a tool for one-way or two-way (or multiple-way) communication with quadriplegics, or possibly even with a person with locked-in syndrome.

Abstract of PLOS ONE paper

Human sensory and motor systems provide the natural means for the exchange of information between individuals, and, hence, the basis for human civilization. The recent development of brain-computer interfaces (BCI) has provided an important element for the creation of brain-to-brain communication systems, and precise brain stimulation techniques are now available for the realization of non-invasive computer-brain interfaces (CBI). These technologies, BCI and CBI, can be combined to realize the vision of non-invasive, computer-mediated brain-to-brain (B2B) communication between subjects (hyperinteraction). Here we demonstrate the conscious transmission of information between human brains through the intact scalp and without intervention of motor or peripheral sensory systems. Pseudo-random binary streams encoding words were transmitted between the minds of emitter and receiver subjects separated by great distances, representing the realization of the first human brain-to-brain interface. In a series of experiments, we established internet-mediated B2B communication by combining a BCI based on voluntary motor imagery-controlled electroencephalographic (EEG) changes with a CBI inducing the conscious perception of phosphenes (light flashes) through neuronavigated, robotized transcranial magnetic stimulation (TMS), with special care taken to block sensory (tactile, visual or auditory) cues. Our results provide a critical proof-of-principle demonstration for the development of conscious B2B communication technologies. More fully developed, related implementations will open new research venues in cognitive, social and clinical neuroscience and the scientific study of consciousness. We envision that hyperinteraction technologies will eventually have a profound impact on the social structure of our civilization and raise important ethical issues.

Flight MH17’s weirdest conspiracy
10 Signs That a Pakistani Guy Has Just Broken Up!
To Top