The noose around JJS Production seems to tighten every day as another video has now surfaced against it. Since veteran actress Salma Zafar pointed fingers at Saud Qasmi and Javeria for exploiting her talent and not paying her for over a decade; things have not been in their favor. Now to make matters worse, threats have started to fly also!

Anny Khan a journalist of Pakistan who used to host different shows on ARY Digital and other channels claims that she was threatened by Saud’s brother for posting and commenting on the matter.

Although, as a journalist, she was just providing information, regarding the JJS Production controversy; she states that Saud’s brother messaged her a very inappropriate form of a message on WhatsApp.

In addition, the journalist states that indeed Zafar is correct on her stance, that whenever someone asks them for money, the owners of JJS Production tend to use very abusive language and derogatory comments.

She wants to show the true face of the Qasmi family and also JJS Production now; she adds that if they think they can threaten her they are wrong.

According to her, JJS Production has been holding back dues of a lot of actors and they must be paid for their hard work. She also adds that a little character assassination isn’t going to stop her from talking about injustice and cruelty in the industry.

She even adds a screengrab of the conversation she had with Qasmi’s brother and people are both repulsed and in shock at the mentality.

Answe to #Saud #Jaweriasaud brother’s THREAT over something i posted. YOU can not Attack me coz i Attack back LIVE. #SalmaZafar

Khan comments that she is not going to back down and also schools Qasmi for his poor use of words.

She states the purpose of going live is to share the traumatic experience. In addition, it is also to bring into light, that Salma Zafar and all actors claiming their dues stand correct.

Now people are applauding her and also supporting her for being brave. Many are badmouthing and reprimanding the Qasmi family for their unethical approach and misuse of power. 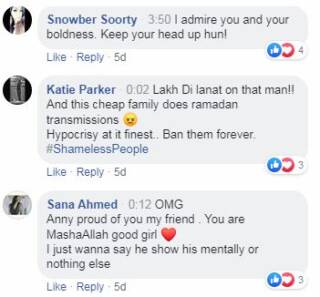 Fans are also supporting Khan on standing up for the right cause. They also are commenting on her bravery!

According to recent reports and claims by actors and actresses, the duo has been holding their payments which are up to 90 lacs for 10 years. It seems JJS Production is going to be facing some criticism and backlash for a while. Let’s just hope they can get their acts straight real soon.

OPTP’s New Mughlai Chicken Burger Has Become The Talk Of The Town!
This Indian Leader Is Asking Muslims To Sacrifice Their ‘Children’ Instead Of Animals On Eid
To Top