Saudi Prince Rents Pyramids Of Giza To Propose To His GF

Ahhh…the miracles people in love create. Valuing their love and doing what nobody ever does, there are people in this world who set amazing examples for other lovebirds to follow. There are couples in the world who do the extraordinary – from the hand-in-hand ‘Follow Me’ shoot to creating unique destination weddings – some couples in love don’t care about anything else but to shower their loved one with all that it takes.

Similar to this is what a Saudi prince did to propose to his girlfriend – he rented the Pyramids of Giza!

As reported by BBC, the Saudi prince rented the Pyramids of Giza for $40 million. Flying miles of distance with hundreds of close people by his side, the marriage proposal was so extraordinary that his girlfriend (fortunately) couldn’t say no to it. 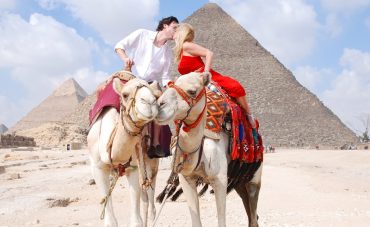 The entire story was reported by BBC, which also claimed that the Saudi Prince took some help from a UK-based concierge company. This company took care of all the legal requirements, including logistics and permits. As per the deal between the parties, tourists and locals were denied access to the Pyramids during the proposal activity.

On the other hand, however, the Director of the Giza Pyramids area Ashraf Mohey Eddin denied all the speculations regarding this proposal by claiming it as “illogical”.

As per the Egyptian law, holding public events such as weddings is banned on archaeological areas. The director further added in his interview with Al-Masry Al-Youm that without the permission of the Minister of Antiquities and the Secretary-General of the Supreme Council of Antiquities, holding concerts and other such extravagant events is not permissible.

While we are not sure who to believe in this situation, we are just in awe regarding this entire proposal the Prince made to his sweetheart. Sadly for us, however, we do not even get a text back from someone we have a crush on. God knows when will we even get our favorite flowers from them.

For all the couples out there, celebrate your love and do something extraordinary. Life is too short to be boring. Don’t worry about your budget and money (just excuses though) – think out of the box. 😉

This Guy Pretended To Be A Cab Driver In Front Of His GF’s Father And What Happened Next Is Absolutely Hilarious!
13 Things Everyone Should Know Before Attending A Desi Summer Wedding
To Top